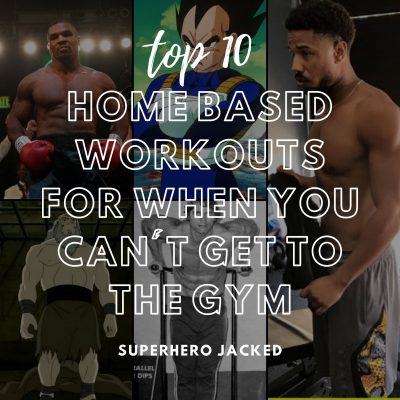 Our Ultimate Calisthenics Workout Routine and Guide is probably our best resources for calisthenics and home based training that we have here at SHJ, and The SHJ Army agrees.

Since I decided to take our Bodyweight Book and turn it into a resource and guide right here for free on the site (which is now The Ultimate Calisthenics Workout and Guide article), you guys have utilized it and shared it enough to even bring it to the first page of Google for “Calisthenics Workout”!

That being said: we have a TON of other awesome options for home based training.

We now have over 1,000 workout routines compiled from celebrity research and also building out inspired workouts based on superheroes, anime characters and other characters in different lore – which all make up our Workout Database.

But, being that there are just SO many routines in there, and the list grows by another 5-15 per week, we also have mini databases for you guys to go in and find some more of the best resources and routines that specifically suit you.

For that reason I also suggest checking out our Calisthenics Workouts Database, which I have been making a point to add to a few times a week to continue growing for you guys.

Today we’re going to be breaking down ten of the very best home based workouts here at SHJ.

Here’s how I’m going to be choosing which workouts make the list:

I’ll also be adding in some bonus workouts and runner-ups at the end to make this a nice and full breakdown of awesome routines to take advantage of, and I should also mention that we will have our Assassin Calisthenics Core Program dropping within our Core Programs this year and becoming part of our Academy Ultra level.

Either way, if you’re looking for some home-based training and calisthenics: I have you covered on this one.

I have to lead with this one because it would be unfair not to give it another mention and risk the chance of you potentially missing out on it.

Not only does it have different levels of calisthenics training for you to progress through, but it also shares TONS of resources for scaling, utilizing other calisthenics routines, endurance training, mixed martial arts, and so much more.

It’s definitely a great resource to utilize, regardless of whether or not you ultimately decide to go with one of the other workouts on this list.

Check out The Ultimate Calisthenics Workout and Guide.

Coming in at number ten is Michael B. Jordan’s favorite calisthenics movements.

The reason it’s not coming in higher on the list is entirely based on the fact that he doesn’t technically share a full workout routine for this one and rather his favorite calisthenics movements to step it up a notch.

From there we went ahead and turned them into a fun workout circuit for you to take advantage of, but more often than not we’ve seen Jordan training with heavy weights!

Next up on the list is one of the most powerful anime characters of all time: Vegeta!

Of course we also have our Goku Inspired Calisthenics Workout – but the two characters (similar to the anime) share a ton of similarities within their training style and therefore workouts; so it’s a safe route to pick your favorite of the two (I know, not easy) and run with it!

Vegeta has also made lists like The Most Powerful Dragon Ball Characters of All Time Ranked, and The Most Popular Dragon Ball Z Characters – so his routine is definitely not beginner level – but also one that can be scaled down and utilized by most!

Click here to check out The Vegeta Inspired Calisthenics Workout.

Next up on the list is the legendary boxer Mike Tyson.

Mike Tyson’s workout is INSANE.  The amount of hours he was putting in daily was actually ridiculous for most people, which is one of the reasons it comes it at number eight on the list.

I still think it’s an extremely valuable resource and routine to show people what it takes to become one of the greatest athletes of all time; but it’s also not necessarily the greatest workout to be immediately stepping into.

Coming in at number seven and just missing the top five by one character routine is Levi Ackerman’s workout.

Levi’s routine quickly became one of the most popular calisthenics workouts we have here available at SHJ after all our anime weebs flooded to the site to take on another Ackerman spin!

We now have a handful of Attack on Titan inspired workouts like Mikasa Ackerman and even Eren Yeager, so AOT continues to rank highly among our SHJ Army.

I didn’t forget about our ladies!

Next up on the list is Olympic gold medal winner (actually, combined 30 Olympic and World Championship medals): Simone Biles!

Biles has a pretty intense training regime, as you may imagine, with endurance training and calisthenics split into two separate routines throughout the day; but it’s still very doable for people looking to scale up their training and take on a different level.

Keep in mind, all the training provided is what she does outside of her actual performance training – if you were wondering how it’s possible to even come close to keeping up with her!

Check out The Simone Biles Workout.

Next up is another female routine, but this time drawing inspiration from one of the most badass female characters of all time (yeah, I said it): Black Widow.

We had our original Black Widow Inspired Workout for a LONG time here at SHJ, but like Vegeta, Black Widow was a character The SHJ Army specifically asked us to go back and revisit as a calisthenics workout.

So, naturally we did it really well!

Did you know Stephen Amell trained with primarily calisthenics and even parkour for YEARS while preparing to become Green Arrow.

Eventually he made the swap over to weights, but that was already long after he transformed his physique and was doing extremely impressive stunts and bodyweight movements.

To this day I still draw inspiration from his original calisthenics routine when I build out some of our character plans.

Coming in at number three is our Kratos inspired calisthenics workout.

Kratos’ original weightlifting routine was one of the most popular character workouts on the site for a while and then when gyms began closing up people still wanted to get their bulky Kratos training on and requested I make a calisthenics variation for it!

This is the outcome, and it’s so good it’s ranking above the rest of these awesome routines I’ve already shared – so that should tell you something.

Speaking of gyms closing due to Covid-19….

When Arnold noticed gyms were closing up and people were becoming less motivated to train (even though they theoretically likely had more time to do it), he immediately shared his old home-based training.

This TECHNICALLY would rank number one on the site if we weren’t going in a character->celebrity order to keep it nice and neat for you guys; but number two will do the job.

The amazing part about this one is that not only is it Arnold’s routine from when he was bodybuilding, but it also is scaled for both beginner and advanced levels of training…by Arnold!

Coming in at number one is everyone’s favorite uncle: Iroh!

Our entire mini-database of Avatar: The Last Airbender Inspired Workouts is more-or-less made up of awesome calisthenics workout routines (with the exception of a few); so that right there is another incredible resource, but my favorite is definitely Iroh’s.

Iroh’s prison training scene reminds me of Bane and when his shirt comes off to reveal muscles we had no idea existed, it just tops so many training scenes for me.

That scene has inspired so many young SHJ Army members to begin training that this workout is just so invaluable and an easy top pick.

That’s a wrap on the top ten home-based workouts for when you can’t get to the gym!

Of course there’s always other alternatives outside SHJ like our calimove, which you can check out a calimove review if you’re interested; but the point is you have a ton of options.

Actually, I’ll even be giving you a lot more below…