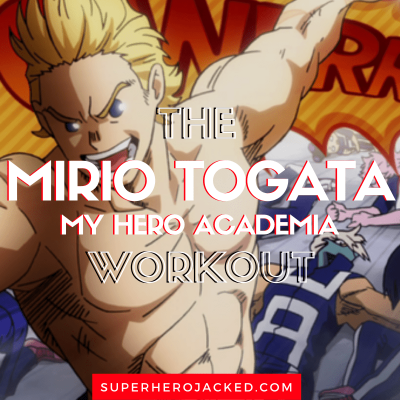 As soon as I met Mirio Togato I knew he had to be a priority for our Anime Workouts in our Workout Database.

Not to mention the fact that you guys have been LOVING the My Hero Academia Workouts and I’ve been getting more and more requests for them every single day…!

Mirio Togato is has the perfect mixture of aesthetic and training that will make an ideal workout routine for anyone looking to achieve The Superhero Physique (which is what we strive for with our Superhuman System as well).

He’s also going to be putting us one step closer to having a separate database strictly for My Hero Academia Workout Routines just like we do for our Dragon Ball Z Workouts.

For now the best place you can go to find more is our Top Ten My Hero Academia Workouts OR simply by using the search bars all over the site!

Mirio Togato is a bit of an anomaly among anime characters when it comes to his height.

He falls a bit taller than the majority who are usually in a short range when compared to other characters and even male celebrities we see at SHJ. 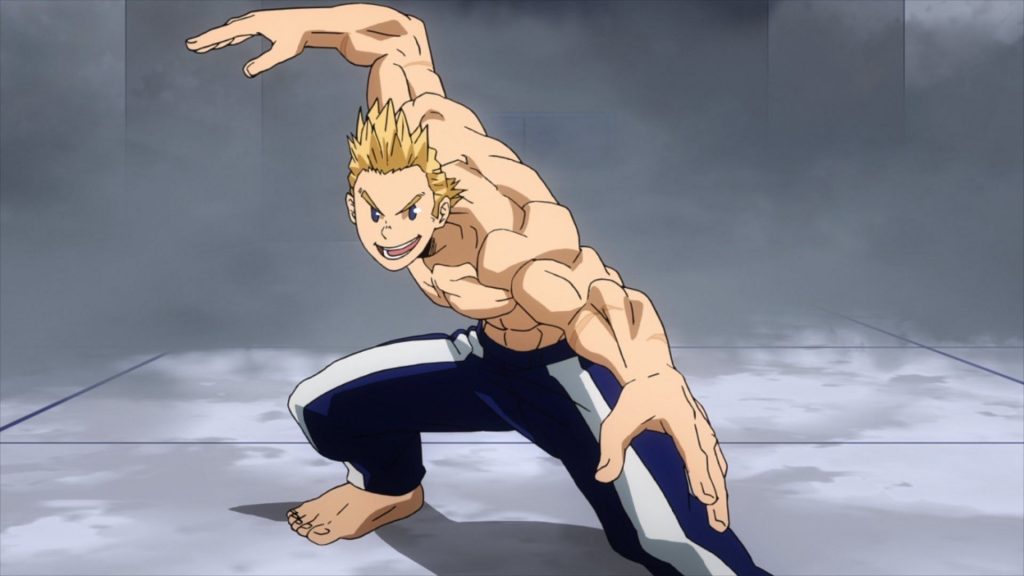 First things first, let’s talk about who Mirio Togato is.

Here’s how his Wiki Fandom starts us off with a brief (and as usual for MHA…very breif) bio:

Mirio Togata, also known by his hero name Lemillion, is a student in Class 3-B at U.A. High School and is part of the The Big 3. Mirio was originally the top candidate to become All Might’s successor and the inheritor of One For All before he met Izuku Midoriya.

You read that right: Mirio Togato was originally in line as the top student to potentially become All Might’s successor for One For All!

To put that a bit more plainly for you: we’re talking about an extremely motivated and powerful student!

And, because it’s relevant to the type of training we’re going to be utilizing, here’s how they describe a portion of his appearance section in his Wiki:

Mirio is a tall young man with a very muscular build who possesses a number of noticeable scars around his lower arms. Mirio’s design is very unique due to his blue oval-shaped eyes, drawn in a simplistic style with no visible sclera, and nose which is prominently rounder than most others. He has blond hair, the top part of which is arranged in a cowlick, while the bottom section is worn swept backward.

Being that we’re also talking about one of the most powerful students in all of U.A. High School, we will be getting a pretty long rundown on skills and abilities.

Here’s just the start of how they describe how strong Mirio is:

Overall Abilities: Mirio is considered one of U.A. High School’s most powerful students alongside Nejire Hado and Tamaki Amajiki, who are all collectively known as The Big 3. Mirio, in particular, has earned enormous acclaim due to a combination of extraordinary technique, great fighting ability and a charismatic personality, to the point of being considered a contender for the No. 1 spot among Pro Heroes and, at one point, a potential successor for All Might as a wielder of One For All. His abilities garnered the attention of the former sidekick of All Might, Sir Nighteye, who personally trained Mirio to the elite status the young hero now possesses.

Mirio possesses inhuman strength and amazing deductive abilities. He was able to defeat 18 out of the 20 students of Class 1-A, including some of its elite students (excluding Shoto Todoroki, who felt unworthy of partaking in the match against Mirio due to not having his Provisional Hero License at the time, and Katsuki Bakugo, who was still under house arrest), who have all fought real villains, with a single punch to each student’s gut in only mere seconds. Thanks to Sir Nighteye’s training, Mirio possesses deductive skills that allow him to accurately predict his opponent’s movements and fighting ability. His mastery over prediction combined with his physical abilities and incredible Quirk makes Mirio truly unrivalled in battle.

On top of this Mirio Togato also has powers and abilities outside of his Quirk that include:

Which are all things we’ll need to tack on top of training for Mirio’s extreme strength.

For the sake of discussing his overall character I do think it’s important to mention his Quirk, especially being that it’s what caused him to train as hard as he does.

Mirio’s Quirk is Permeation which allows him to become intangible, letting him pass through any tangible matter!

This allows him to do incredible things, but at first it barely allowed him to do anything, and his dad even quit being a hero because it was too much to get control of.

So, for this one we’ll need you to be extremely motivated like Mirio.

To train like Mirio Togato we’ll be mixing calisthenics with weight training and working out super-high-volume just like Mirio did to train for his own quirk.  We’re working around a 6 day schedule that will consist of a long distance cardio day, a long weighted trek, and four days of weights and calisthenics revolving around our big four compound movements.

Tuesday: Deadlifts, Back, Biceps and HIIT

Pack up something heavy in the backpack, throw it on, or grab that weighted vest, because it’s time for a weighted trek.

We’re talking about 10-15 miles on hilly terrain if possible.

If you can only make it 3-5 miles to start that’s fine (that’s great!), just be sure to progress each time the same way Mirio would.

As we did for our Shinra Kusakabe workout this week as well, we’re going to be basing your running on different performance levels and scale it up over time, but you can always scale higher by adding a weighted vest or a backpack as well.

You can also scale by breaking and walking at any point during your running.

Here are some other workouts to help you build up to longer runs: