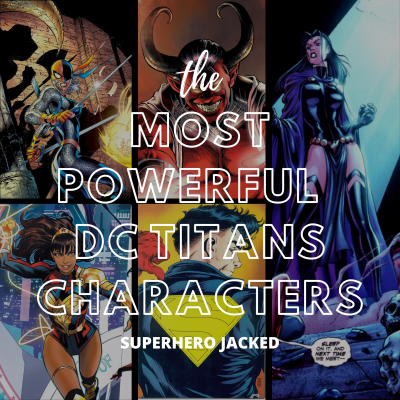 We’re back at it again with another ranking for DC Titans. This time we are going to rank its Most Powerful Characters!

Now, you might look at this list and ask why your favorite characters from Season 3 aren’t on here, but that’s because it hasn’t been released yet, so we are focusing on Seasons 1 & 2.

The characters on the top ten definitely deserve their slot, but before you start coming to me with you’re objections and references; just know we are basing these rankings on the show and not the comics.

We have our DC Inspired Workouts in a mini-database within our larger Superhero Workouts Database like we’ve now been able to do for a handful of the most popular shows – and we also even just recently got our Justice League Workout Placement Quiz to help SHJ Army members find the best workout for them.

For this one we had to use some resources like Looper, CBR, and our own calculated opinions to form these rankings. In a series like Titans, where you have aliens, superhumans, and demons; it was kind of easy to find out who would come out on top in a fight.

THE MOST POWERFUL DC TITANS CHARACTERS

Starting off our list of The Most Powerful DC Titans Characters is Robin!

Though lacking in the calm and controlled fighting style of Grayson and Bruce, Jason still has the training and experience from working with Batman. The only downside is that he is over-confident and doesn’t realize the more training he does, the better he will become.

But Jason will eventually learn from his mistakes….right? Right!?

Coming in at number nine on the list of the most powerful DC Titans characters is Rose Wilson!

Rose gets this ranking for landing the killing blow on her father, Deathstroke.

Even only having a fraction of her father’s skill and power makes Rose a deadly foe to go up against. Not only does she have speed healing, but she spent a couple years being trained by one of the scariest assassins in the world.

Let’s just say, I wouldn’t want to get her angry.

Coming in at number nine on the list of the most powerful DC Titans characters is Nightwing! (See, no bias)

Even though he is the team’s leader, he can’t go down as the most powerful titan. But leaders don’t have to be the strongest, they just have to be able to utilize everyone’s strengths the right way to form the best team.

Even with YEARS of training under Batman (which is every superhero and sidekick’s dream), Grayson is only a human, and a human can only go so far compared to metas and super humans. But with his much higher than average mental, physical, and leadership qualities (plus his resume experience with Batman), he is well-respected by everyone.

Don’t get me wrong, if this was a strength test against other humans, Grayson would take the prize.

At number eight among the most powerful DC Titans characters is the badass assassin: Deathstroke.

Slade Wilson isn’t your typical human; he’s a super soldier. Think Captain America, but instead of being a superhero, he’s a hired killer (scary, I know).

Having trained with the League of Assassins just like Batman, Slade is very skilled in tracking, fighting, and killing. Not only does he know his way around a sword, he also has an arsenal of military weapons at his disposal.

Let’s just say, if it wasn’t for his family being his one weakness, it would have taken more than just Rose and Grayson to take Deathstroke down.

Next up among our most powerful DC Titans characters is Beastboy!

Tell me not, if you saw a green tiger in the middle of the street, you would freak the heck out! So would most people. But that’s only scratching the surface (see what I did there). Garfield can turn into any animal he wants, even a T-Rex, so imagine how scary that would be. We just haven’t seen many variations in Garfield’s transformations due to the series not have a big budget for CGI.

Just missing the top five and coming in at number six among the most powerful DC Titans characters is Aqualad.

Technically, Deathstroke didn’t kill Garth, Garth sacrificed himself. And the fact that Garth was the only one to notice the bullet and fast enough to stop it from reaching its target just goes to show that he was a capable superhero. Strong, fast, and not to mention, the power of controlling water. Too bad he ended his career early.

Making it to the top five among the most powerful DC Titans characters is Wonder Girl!

Just picture a younger Wonder Woman and you have an idea how strong Wonder Girl is. Donna has the same powers and training as her predecessor, just not as much experience. She’s strong and fast enough to go head to head with Super Boy, and is even known for being a counsel to Grayson.

At number four among the most powerful DC Titans characters is Starfire!

I’m sure we haven’t seen all of Kori’s powers due to her amnesia. But even still, what she has shown us so far is super impressive. She has speed healing, super strength, and a durability only second to Super Boy. When she eventually figures out how to use her powers on Earth, she’ll be a force to be reckoned with.

Coming in and making the top three among the most powerful DC Titans characters is Super Boy!

Super Boy is proof that all you need is an indestructible body to be one of the strongest beings in the world. He’s like 2 weeks old and still able to hold his own against the Titans, without any prior training (good genetics, am I right).

Good thing he was being controlled in the season 2 finale and he wasn’t just naturally evil. That would have ended badly.

Coming in at number two among the most powerful DC Titans characters is the father of the year: Trigon!

Trigon is pure evil incarnate. All he wants is absolute domination, and he almost got it, too! If it wasn’t for his own child (Raven) turning on him, he would have done to Earth what he did to countless other planets; rule them.

Coming in at number one among the most powerful DC Titans characters is the almighty Raven!

The main reason Rachel is at the top of the list is because she was the one to beat Trigon, the season 1 baddie that made short work of everyone else. Although her powers aren’t currently at their full potential, we already see how strong Rachel is; and she’s getting stronger everyday. She even refuses to fight because she doesn’t want to hurt anyone if she lost control of her powers.

Now just imagine she gave in and fought someone with 100% of her power (absolutely terrifying).

Would you place Raven at number one, or do you think someone is hiding a trump card?

I’d also love to hear who YOU think should be on this list!