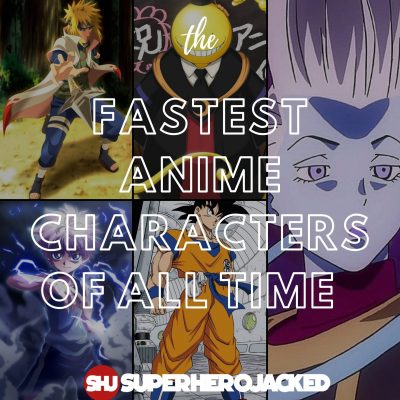 The characters on the top ten deserve their slot, but take note that their placement here is based on their own ranking in their respective shows. Think of this list as kind of like the Olympics of Anime – Each show’s characters goes head to head and the winner gets to be the “fastest” in their respective show and gets to be featured on this list.

I mean we literally had to make cuts to some of the characters being added to our list of The Most Powerful Anime Characters of All Time because I didn’t want to list too many Dragon Ball and Naruto characters!

BUT, before I rant about the speed of these characters too much, I want to point out that it’s not just super speed we’re considering here, but also speed in driving, cycling, and other facets of speed. So, don’t be surprised if not all of the characters on here are superheroes. (although some will be – SHOCKER)

Here at SHJ, we pride ourselves in having the most comprehensive workout database for anime and superheroes there is, and to make it easier to navigate the many characters and shows, we’ve divided their workouts into sections, like our Anime Workout Database.

For this list, I had to do a lot of research because when listing the fastest characters, you have to look at more than a few shows. Many of the sites I visited like CBR, Ranked, Top Tens, and Latest News showed some similarities so I averaged each character’s placement to come up with this list.

As always, let me know in the comments who you would have ranked in this list.

THE FASTEST ANIME CHARACTERS OF ALL TIME

Starting off our list of The Fastest Anime Characters of All Time we have a Hunter x Hunter fan-favorite, Killua Zoldyck!

Killua came in as one of the Most Popular Hunter X Hunter Characters of all time – and there’s no surprise he’s landing on the list of the fastest out of all our anime either.

Killua is the third child of Silva and Kikyo Zoldyck, and the heir of the Goldyck legacy and fortune. He is a young boy with deadly skills – being a master of advanced hand-to-hand and armed combat, and thanks to his combat training at a young age, has superhuman strength, speed, agility, and endurance. Despite being less than 10 years of age, he is also a master strategist and has a genius level intellect.

Do you agree with Killua’s placement in the top ten or would you push him down to the honorable mentions and bring someone else up into his slot?

Coming in at number nine on the list of the Fastest Anime Characters of All Time is Assassination Classroom’s homeroom teacher, Koro Sensei!

Koro Sensei was even one of our Most Powerful Anime Characters Of All Time!

At number eight among the fastest anime characters of all time is the protagonist of the anime show Bleach – Ichigo Kurosaki.

Obviously among the fastest we’ll also see some extremely powerful characters, and that includes Ichigo, who is another character who also made our Most Powerful Anime Characters Of All Time.

He is a teenager with the ability to see spirits who gains the powers of a Shinigami from Rukia Kuchiki. He is a hybrid of Human, Soul, Quincy, and Hollow. Because of his hybrid nature, he is able to move and react to things in a near-superhuman way and is extremely durable and strong enough to be capable of fending off multiple combatants at the same time. Because of his training, he is able to move at great speeds and observe things before they happen – which allows him to dodge and counter attacks from much faster opponents.

Next up among our fastest anime characters of all time is one of the fastest students in Hoshinoumi Academy – Jojiro Takajo.

Jojiro Takajo is a member of the Hoshinoumi Academy student council. He is now 17 year old. He is an ability wielder that can move at very fast speeds. He entered to Jetix University and becomes the honours student at Course 1 Class. He cannot control his speed however, and sometimes overshoots the destination he wants to arrive at.

At number six on our list of Fastest Anime Characters of All Time is Sega’s blue blur – Sonic the Hedgehog!

Everyone who grew up in the 90s has heard of Sonic. Before there was the Flash, Sonic was by far the speediest little speedster on TV. He was so fast that even a scientist riding an actual rocket could barely keep up with him. According to research, Sonic can travel at the speed of sound – or 767 miles per hour.

Making it to the top five among the Fastest Anime Characters of All Time is Admiral Kizara aka Borsalino.

He is an Admiral in the Marine Corps and one of the main antagonists in the show One Piece. He commands a vast military army, and due to eating the devil fruit Pika Pika no Mi, is able to transform himself into light and move at the speed of, well, light. While in his light form, he is able to consciously adjust his trajectory and anticipate attacks coming from all angles.

At number four of the Fastest Anime Characters of All Time is everyone’s favorite Super Saiyan, Son Goku.

Goku is a human who was trained to reach new levels of power in order to become the greatest Saiyan of his generation. After years of training with Master Roshi, Goku becomes the greatest defender of Earth against alien conquerors.

Coming in and making the top three among the Fastest Anime Characters of All Time is Naruto’s father and the 4th Hokage of the Hidden Leaf Village, Minato Namikaze.

Minato is one of the fastest shinobi of the Hidden Leaf Village, mastering the ability to move at faster than lightning speed using the Flying Thunder God technique.

Coming in at number two among the Fastest Anime Characters of all time is Saitama, the One Punch Man himself!

I should make a point to say: Saitama is the fastest in his universe.

Despite being just a regular human, Saitama trained his body to the point that his strength, speed, endurance, and stamina are at peak superhuman levels. He can move faster than any of the other heroes in his world, and is assuredly stronger – as evidenced by his name, he can defeat most opponents with merely a single punch.

Hero or Villain: Both

Coming in at number one among the Fastest Anime Characters of all time is Whis!

Whis is the Guide Angel Attendant of Beerus, the God of Destruction, as well as his martial arts teacher. As Beerus’ teacher, he is the strongest being in Universe 7. In the Dragon Ball Super arc, Whis is recognized as the fastest character in the universe.

As a feat of his speed, he is able to traverse nebulas and other universes with ease. To cement his place on this list, let’s hear from the show’s creator, Akira Toriyama, who says: “in terms of power, Goku as a Super Saiyan God would be a 6, Beerus would be a 10, and Whis would be a 15.”

Would you place Whis at number one or does Saitama give her a run for her money?

Coming Soon…But we do have:

The Fastest Anime Characters of All Time (Runner Ups):