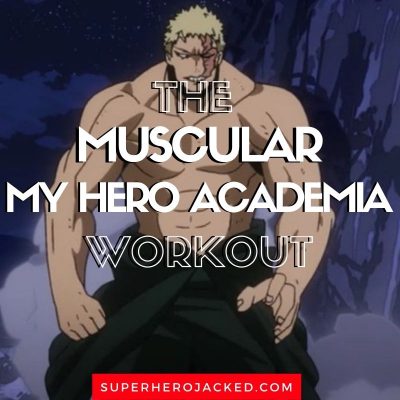 We’ve seen over ten My Hero Academia characters already here and The SHJ Army LOVES them.

At first Dragon Ball Z Workouts brought us into the world of anime, but My Hero Academia seems to be becoming a fan favorite in our Workout Database.

How better to express that fan favorite than to bring it back with some villains to show our appreciation?

We recently had a couple (Endeavor and All For One), but we’re coming back for a couple more before we get into even more heroes!

Eventually I’ll even be able to put together a full page like we have for DBZ.

But for now let’s get ready for the next season release!

His 6’7 stature puts him right there with super-villain Bane! 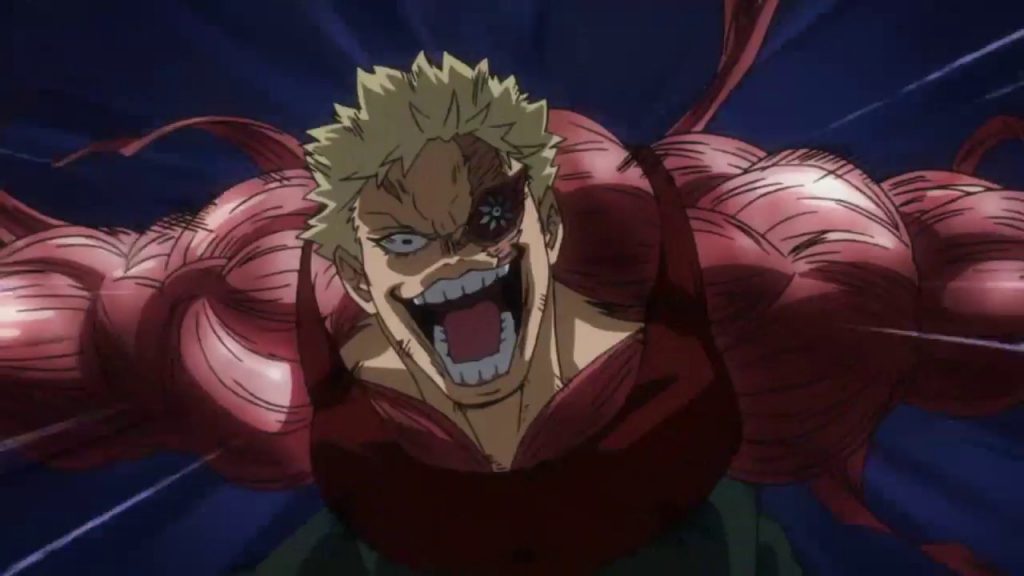 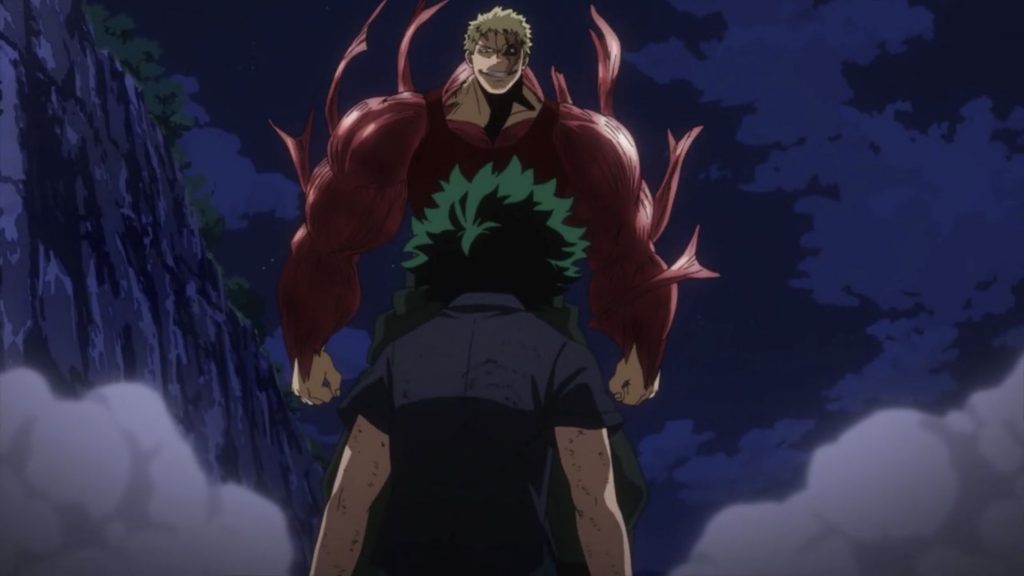 We’re going to start by talking a bit about Muscular’s overall character.  It may be obvious where we’re going with this workout, but I don’t want to skip by all the fun!

Muscular is a villain affiliated with the League of Villains as part of its Vanguard Action Squad. He and the rest of his squad serve as the primary antagonists of the Forest Training Camp Arc.  He is currently incarcerated in Tartarus.

And they continue to tell us about his appearance (if it wasn’t obvious enough):

Muscular is a large, bulky and extremely muscular man set wide with short, spiky blond hair and small black eyes. He has a large scar going across the left side of his face, his left eye replaced with a prosthetic one, and he has another, smaller scar on the right side of his forehead.

If I’m being completely honest and blunt: his powers and abilities (including his Quirk, obviously) is exactly what we’d think it is judging by his appearance.

Here’s what his abilities are:

Overall Abilities: Muscular is a very powerful villain, being one of the strongest members of the League of Villains’ Vanguard Action Squad. His incredible aptitude in combat allows him to singlehandedly overpower, and potentially kill, Pro Heroes, most notably, Water Hose. Muscular also has a great handle on his Quirk, Muscle Augmentation, which he used to exponentially increase his physical brawn in parts of his body, or his whole body. By infusing his heightened strength into his melee combat abilities, Muscular overwhelms his opponents with blurring speeds while delivering heavily reinforced strikes, making him a highly formidable force to be reckoned with. While he is powerful, Muscular does however sustain some form of injury after a bout, such as his missing left eye caused by his confrontation with Water Hose. Muscular’s bloodthirsty nature, coupled with his combat efficiency, earned him the epithet, “The Carnal Murderer“.

He was more than capable of repeatedly overpowering Izuku Midoriya, an inheritor of One For All, who is also one of the most powerful students at U.A. High School. Even when Izuku delivered a 100% “Detroit Smash”, which is equivalent to the strength of All Might, Muscular emerged virtually unscathed, albeit at the cost of his tank top and one of his prosthetic left eyes. After the said attack, Muscular revealed was holding back a great deal of his strength, and when he decided to fight seriously, he not only continued to dominate Izuku, but nearly killed him too, even as the young hero employed another full-power “Detroit Smash”, had it not been for the intervention of Kota Izumi. Kota’s actions inspired Izuku to go beyond 100% of One For All in order to overcome Muscular’s power and defeat the villain. Battling against Izuku showcased that Muscular’s overall prowess is enough to contend with someone of All Might’s caliber.

And that’s all without even discussing his Quirk, which is Muscle Augmentation.

Here’s how his Wiki Fandom describes it:

Muscle Augmentation: Muscular’s Quirk allows him to greatly amplify his own muscle fibers, even reaching a point where they can’t be contained by his skin. These enhanced muscle fibers exponentially increase all of Muscular’s physical abilities to a superhuman level, roughly on par with One For All.

He has also been shown to use his Quirk for defense by covering his whole body in an armor of augmented muscle fibers.

Immense Strength: Thanks to his Quirk, Muscular exhibits extreme levels of physical strength. Even when holding back, he is able to shatter rock and overpower Izuku Midoriya with minimal effort, such as sending the young hero flying with remarkable force with a mere kick. When fighting seriously, Muscular’s reinforced strikes were able to cause destruction on a scale to similar to Izuku’s 100% Detroit Smash. He was also able to directly overpower Izuku, who was using One For All at 100% at the time, in a physical clash.

Immense Durability: Muscular possesses a frightening level of impermeability to physical harm. He was able to take the full brunt of Izuku’s 100% Detroit Smash, which is on the same level as All Might’s power, with minimal injury. However, he was incapacitated only after Izuku went beyond his limit with One For All. Even after the battle, Muscular was shown fully awake, and fighting with his restraints while Izuku was in a coma.

Immense Speed: Muscular has shown to be surprisingly swift despite his large bulk. He was able to catch Izuku off-guard several times during their fight. With the increased muscle mass in his legs, Muscular is able to launch himself off the ground at blurring speeds. Izuku surmised that, even if he took Kota and tried to run back to the training camp, Muscular would overtake them in seconds the very minute the young hero opted a hasty retreat, especially since Izuku was exhausted from the training that day.

If you really need me to spell it out: we’re training to get STRONG!

We’re going to do it all Quirk-less; Deku style!

We’re going to be doing some mixed training starting with 5×5 compounds and then working our way into accessory work that will consist of of  pyramid training, straight sets and even a couple supersets that will be used as finishers.

Friday: Back Squats and Accessory Work