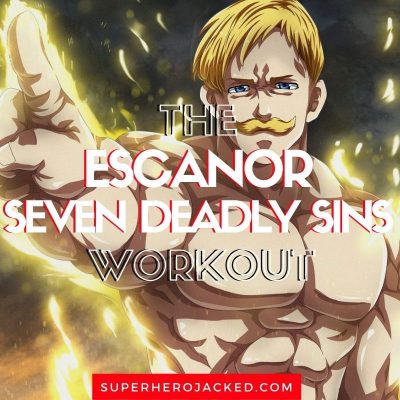 We’ve had a couple Seven Deadly Sins characters make appearances at SHJ in the past, but now it’s time to get some BIG guys featured this week.

And by that I mean Escanor and Mael!

Prior to this we have our Meliodas Workout and our Ban Workout, but with gyms opening back up I figured it’s a perfect time to bring in a couple JACKED characters to build workouts for.

When we get to his comparison and size below you’ll see he actually comes in as one of the largest characters we’ve seen at SHJ.

So expect to lift HEAVY and be ready to train to grow mass!

See what I’m talking about!?

Escanor, at 10’8 is the largest character we’ve seen.  We’ve had a few weigh in around the same, if not more, but he is HUGE! 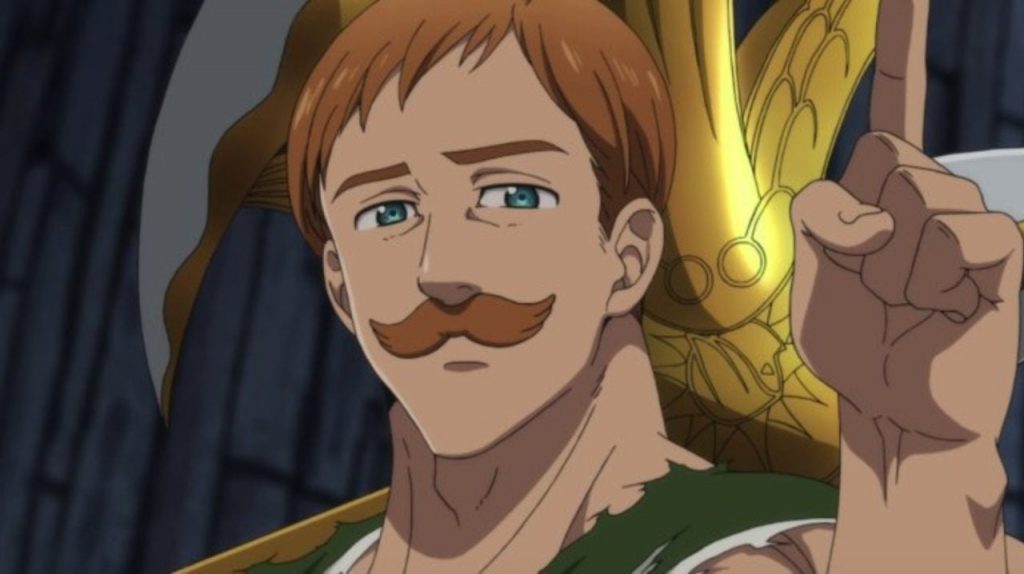 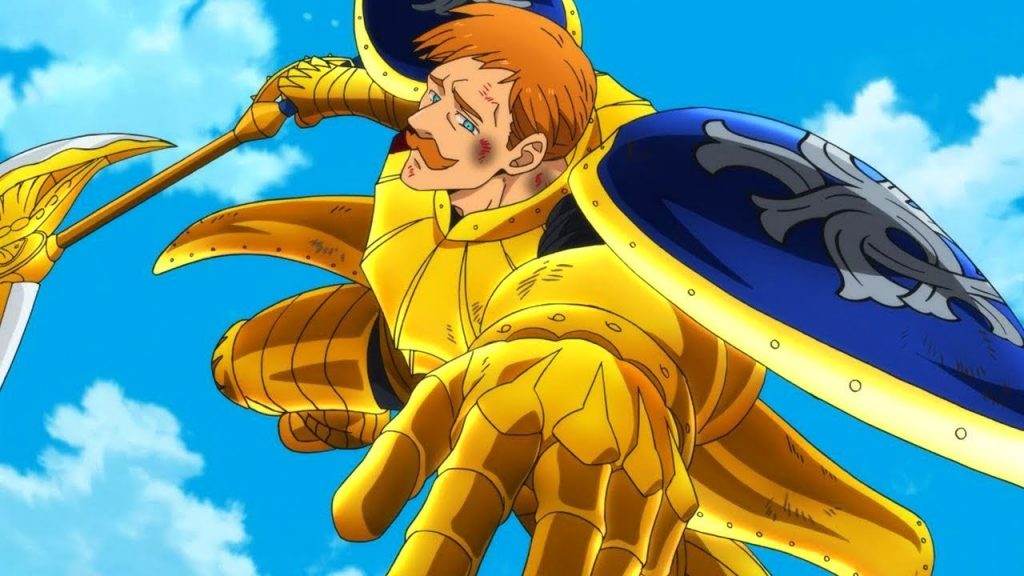 The best way to get started is to understand a bit more about Escanor.

For that we’re going to be pulling information straight from his Wiki Fandom.

Here’s how they start with his brief bio:

Escanor was the Lion’s Sin of Pride of the Seven Deadly Sins, the former second prince of the Kingdom of Castellio, and the man known throughout the Kingdom of Liones as “The Strongest Holy Knight”. His Sacred Treasure was the Divine Axe, Rhitta, and his inherent power was called Sunshine, which made him renowned for gaining immense power during the day, and gradually becoming weaker with the setting of the sun, leaving him frail and submissive at night.

They also continue to build on this with a brief history for his character as well:

Escanor was born 40 years ago, the prince of the Kingdom of Castellio. When he was a child, his older brother Daymond used to pick on him, until one day his power awakened, and he accidentally broke his brother’s arm. His parents disowned him because of what happened and his strange unexplained appearance, and soon the Kingdom’s forces mobilized to kill him. He was rescued by a kind woman named Rosa, who hid him in a barrel and set it adrift at sea. He survived but wherever he went, people called him a monster even when he helped them.

We’re going to be looking to awaken our power as well.

Except we’re not going to be waiting quite as long as Escanor did.

As far as Escanor’s power and abilities, his Wiki Fandom actually goes into some awesome depth.

Here’s how they start by describing it:

Escanor has been described as the strongest member of the Seven Deadly Sins, as upon his fight with Galand and Melascula, two of the Ten Commandments, he easily defeated them when the sun began rising with little effort whereas Ban and Jericho could not do anything against either. Escanor’s might is considered monstrous, both by enemy and ally alike. Estarossa, one of the strongest members of the Ten Commandments, refused to believe someone so powerful was a human and was rendered paralyzed in fear of Escanor’s might.

Even Meliodas, the leader of the Sins, has acknowledged Escanor to be far stronger. Merlin also has a lot of faith in his abilities, acknowledging Escanor as the only individual who can stop Meliodas when he reverted to his previous self. True enough, using “The One” Escanor was able to defeat Meliodas in his Assault Mode with a single attack, although it is worth noting that before reaching The One, Escanor was barely capable of holding off Meliodas. At night, however, his power is the weakest due to the setting of the sun, rendering him powerless and unable to use his magic.

In battle, Escanor primarily relies on the rising of the sun to use his magic, Sunshine for battle. As when the sun rises, his magical power and size grow greatly. Just nearing noon causes his body to emit an enormous amount of heat to the point of being able to melt armor like nothing and incinerate others by being around them. Just using a single attack caused a lake to be evaporated in a flash from the intense heat Escanor gave off. His incredible brute strength increases in conjunction with his magical power, as a single swing from his axe Rhitta upon transforming, was enough to cleave Galand in two and swing it with a single arm whereas Galand has a hard time even moving it with two. Escanor’s durability also increases with his magic as his muscles were durable enough to catch Meliodas’ weapon when he attacked in Assault Mode and easily brushed off a series a slashes at his peak. Escanor’s speed also increases with his magic as he could easily match Meliodas’ speed in Assault Mode with his weapon and managed to block various attacks from the notably swift Ludociel with ease.

I think you should be able to see where this one is headed.

The key to this training is going to be strength.

That first sentence tells us: “Escanor has been described as the strongest member of the Seven Deadly Sins”, and they proceed to share they even Meliodas, the leader of the Sins acknowledges that Escanor is FAR stronger!

His Wiki Fandom also discusses all his abilities and weapons as well.

So if you’re interested in his full lore and the entire character dynamic then I definitely suggest giving it a full read.

But, I think it’s time to build a routine that has us lifting a TON of weight.

For Escanor’s training we’re going to be powerlifting! If powerlifting isn’t exactly your style, that’s okay, our next routine will be Mael and we’ll be looking to get HUGE and tack on mass with a different format. Your Light Cardio during Recovery day is optional.

Monday: Squats and Back Work

Thursday: Squats and Back Work

Escanor Workout Routine: Squats and Back

Bench Row (Or some variation of a chest supported row)

For this I recommend 30-60 minutes of varied cardio.

You can do this any way you please, but keep it light and let your body recover!

I personally do 10-20 minutes on multiple cardio machines ranging from:

Escanor Workout Routine: Squats and Back

Bench Row (Or some variation of a chest supported row)