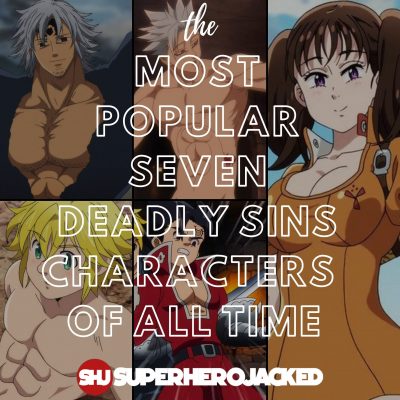 With season 5 having come out on Netflix not too long ago, we are going to be basing these rankings on the most recent breakdowns of popularity across the board, while still taking into account the long-time fan-favorites!

Almost half the list of our most popular Seven Deadly Sins characters also have already made their way onto our list of The Most Powerful Seven Deadly Sins Characters of All Time as well – and I will point out one or two slots below along the way.

If you want more workout routines like these, we have our Anime Workout Database – and we also even got our Workout Placement Quizzes to help SHJ Army members find the best workout for them.

To create this list, I searched across MyAnimeList, Fandom, CBR, and TopTens to see which characters placed in the top ten among most fans worldwide. This list is the combination of those. So, sit back, relax, and enjoy reading!

TOP 10 MOST POPULAR SEVEN DEADLY SINS CHARACTERS OF ALL TIME

Coming in at number ten among our list of the most popular Seven Deadly Sins characters of all time is Gowther, a doll brought to life!

Gowther is the Goat’s Sin of Lust and was the creation of a great wizard in the form and likeness of his old lover. He presents a rather emotionless personality and does things with no emotional attachments. Because of his inability to understand human emotions, he goes to great lengths to try to understand them more. He even accompanies Elizabeth out of duty. After receiving his memories back, he starts to show more personality and affection when interacting with the other Sins.

Number Nine: Estarossa, The Son of the Demon King

Next up, at number nine on our list of the most popular Seven Deadly Sins characters, is the former Archangel Mael, now made to believe himself to be the illegitimate son of the Demon King, Estarossa!

Mael was one of the Four Archangels of the Goddess Clan, but during the Holy War 3,000 years ago his and everyone’s memories were altered so that he assumed the identity of Estarossa, the Demon King’s illegitimate son. When his memories were returned to him, he felt remorse for killing so many innocents and was conflicted about joining the Sins in the Second Holy War

At number eight in our list of the most popular Seven Deadly Sins characters is the legendary mage, Merlin!

Merlin is recognized as the most powerful wizard in the land of Britannia and is also the Sin of Gluttony. She is a calm and passive person, preferring to avoid conflict even when facing off against tough opponents. This allows her to analyze situations during fights and come up with sound battle tactics to defeat even the toughest foes.

As a mage, she draws from both her magic and her years of experience. Ever curious, Merlin has halted her aging, wanting to spend her days learning about the world, and shows a natural curiosity for things she doesn’t know.

At number seven on our list of the most popular Seven Deadly Sins characters of all time is Diane, the Sin of Envy!

A giant from Megadozer who has sympathy towards humans and is loyal to Meliodas and the kingdom of Liones, Diane is a formidable warrior who balances the aspects of both kindness and ferocity.  She may be a gentle giant, but that doesn’t mean she can’t stomp you flat if you try to hurt her or her friends. She has a happy and bubbly personality but can be fierce if you incur her wrath.

Just missing our top five most popular Seven Deadly Sins characters of all time is the Son of the Demon King, Zeldris!

An Elite warrior of the Demon Clan, Zeldris is the leader and Piety of the Ten Commandments, he is also the younger brother of Melodias. When Melodias escapes the Demon Clan, it is Zeldris who is tasked with hunting him down. He has a calm and collected demeanor and was actually once a genuinely happy young man. He fell in love with Gelda the Vampire and acts in order to protect her from any harm. When his father ordered him to decimate the Vampire

Coming in next and starting our top five most popular Seven Deadly Sins characters of all time is none other than Elizabeth!

We all know Elizabeth as the lover of Meliodas, captain of the Sins, but she is MUCH more than just that.

Elizabeth is a very polite, grateful, and caring person who prefers to use a peaceful and diplomatic approach when approaching strangers and potential encounters. She is the current reincarnation of the Goddess Elizabeth and the lover of Meliodas. She was originally fragile, but after awakening her goddess powers, she becomes a powerful ally for the Seven Deadly Sins against their battles against the Ten Commandments.

It might not look like it, but Elizabeth has really strong powers. We don’t really see her use them because she does not want to fight or hurt anyone, thus she chooses the peaceful route most of the times. She focuses more on healing magic and her grace than on offensive magic. And seeing how she is the daughter of the Divine Deity, she is sure to have a large supply of magic on standby.

In the top fourth slot in our list of the most popular Seven Deadly Sins characters is the Strongest Holy Knight, Escanor!

The former Prince of Castellio, Escanor is famous for being the strongest Holy Knight thanks to his inherited ability called Sunshine, allowing him to become stronger as the day gets ahead, and becoming weaker as the sun dips into the horizon. His personality also changes as the day goes on, becoming boastful and domineering during the day, and becoming submissive and unfailingly polite at night.

He may be the Sin of Pride, but that doesn’t prevent him from acknowledging others who have great strength, such as when he admits the strength of both Melodias and Estarossa is formidable.

King is the protector of the Fairy Realm and the Fairy  King’s Forest. He is the older brother of Elaine, and the husband of Diane, the future Giant Queen. Like Elaine, he is a peaceful soul, and really only resorts to violence when pushed to his limits. He has been known as a sensitive and caring member of the Sins.

He is also hard-working, which is ironic considering he is the Sin of Sloth. He is the most rational of the group and is completely surprised that the other Sins could lose their own sacred treasures.

Coming in at number two among the most popular Seven Deadly Sins characters is Ban, the Sin of Greed.

Ban is a passionate man who acts based on his own interest or when he sees a cause that is worth giving his time to. He is the husband of Elaine and the father of Lancelot – and an absolute fan-favorite!

Not only is Ban the second most popular character in the entire anime, just behind the groups leader (spoiler alert), but he also came in at number three among The Most Powerful Seven Deadly Sins characters of all time as well!

Number One: Meliodas, The Sin of Wrath

He was initially a villain in the early history of the series and was the likely candidate to be chosen to become the next Demon King. However, he fell in love with the goddess Elizabeth and defected to the side of the gods. His defection and subsequent killing of two Commandments during his escape started the Second Holy War.

He has a strong sense of justice and is known to be quite frank and extremely fearless. He doesn’t shy away from helping others when they need aid.