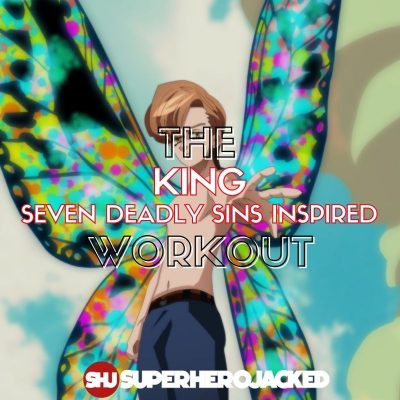 It worked out perfectly that we’re seeing both King and Diane join our Seven Deadly Sins Inspired Workouts back to back.

It’s also a lot of fun that Diane actually comes in as the character we’re getting big heavy weightlifting for and King we’re going to be working around calisthenics and cardio!

I love being able to switch it up, and it’s also going to make both our Anime Workouts Database a bit more fun and give some extra fun to our Seven Deadly Sins Workout Placement Quiz as well!

Oh, but I should lead with the fact that regardless of how good I am at making these workouts (I’ve done over 1,000 and hundreds of thousands of people have used them, etc.), I still won’t be able to help you train enough to grow King’s wings…

For this one we’re MAINLY focusing in on King’s final form with full wings, including that slim and toned physique.

At 5’11 he actually comes in a bit above average compared to a lot of the other male anime characters we’ve seen, although he definitely doesn’t come close to some of the behemoths we have within our databases. 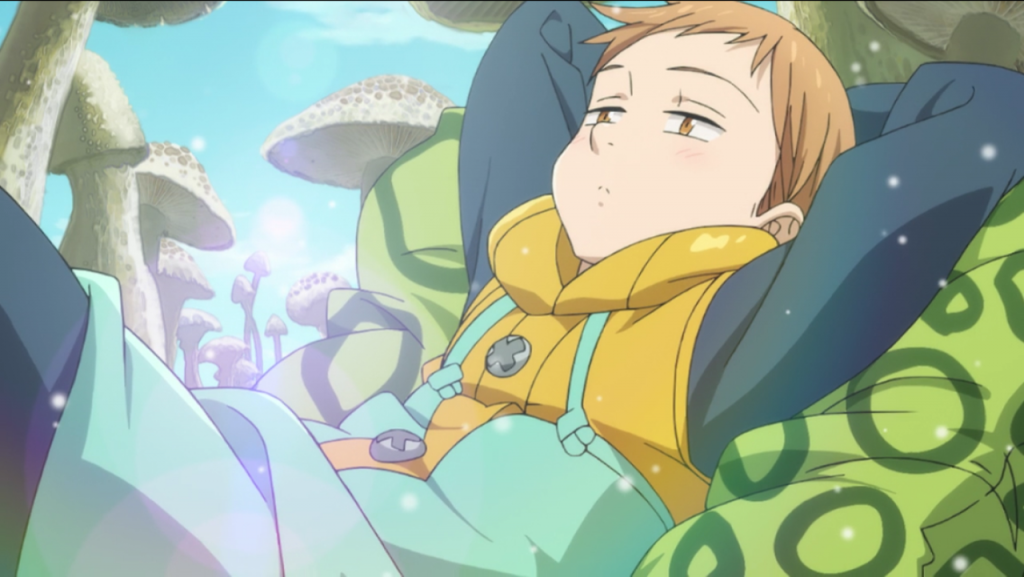 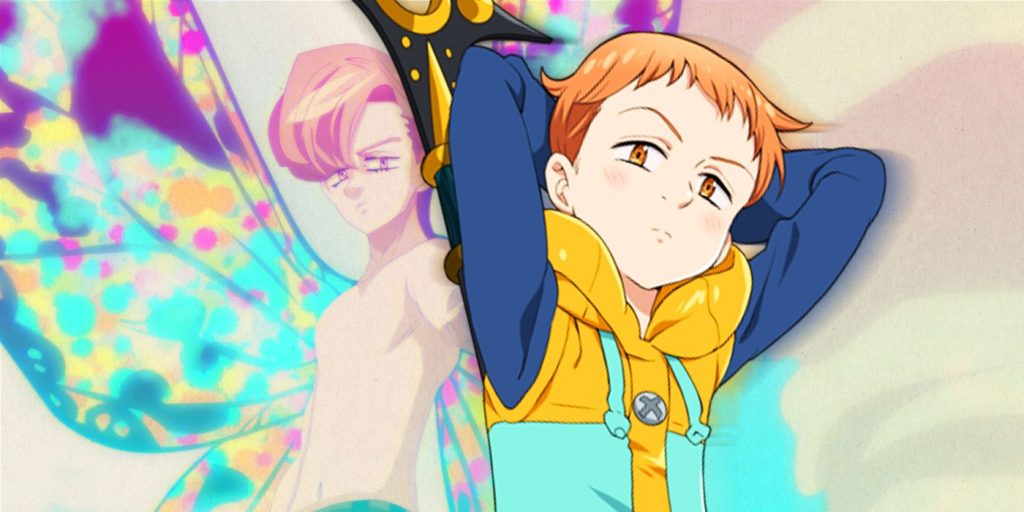 To start off our research into King we’re going to be pulling right from his Wiki Fandom page, which leads with this bio:

King of the Seven Deadly Sins. His real name is Fairy King Harlequin and he is the protector of the Fairy King’s Forest and the Fairy Realm. His Sacred Treasure is the Spirit Spear Chastiefol, which he uses in conjunction with his inherent power, Disaster. He is also the older brother of Elaine, the guardian of the Fountain of Youth, as well as the husband of Diane, a fellow member of the Sins, and a future Giant Queen.

And moving quickly into his abilities and equipment section (I promise there’s good reason for the haste), we get a GIGANTIC description about his abilities.

As a member of the Seven Deadly Sins and the current and most powerful Fairy King in all of history, King is extremely powerful. He is strong enough to overpower a Great Holy Knight single-handedly. Being a Fairy, King has demonstrated a number of abilities unique to his species; such as the ability to levitate or fly, the ability to change his appearance and clothes at will, as well as possessing great speed equal to Meliodas and Ban. Upon unleashing his true power, Meliodas and Ban commented that his strength grew to “an incredible level”. This was later re-affirmed when he defeated Helbram, a Great Holy Knight level combatant while protecting all the injured in the area; then almost immediately after, swiftly defeated Dreyfus, one of the Great Holy Knights of Liones, despite the injuries he sustained from his battle with Helbram. During his reign as the Fairy King, his power was said to be so great that it kept the human kingdom from invading the Fairy King’s Forest. It should be noted that this included the Holy Knights of Liones.

Yes, you read that right. He is the most powerful Fairy King in all of history – making him extremely powerful, and one of the reasons he came in on our list of The Most Powerful Seven Deadly Sins characters of All Time!

But, all that said…it doesn’t really help us all too much with this routine considering we’re going to be looking to build physical strength (like we saw from Diane), not magical strength and power.

Here’s how they continue, which moves into a bit of my point:

Despite his great power, King is physically weak, however, he makes up for his lack of strength with his sacred treasure, Spirit Spear Chastiefol, and his immense level of magic power. In spite of his lack of physical strength, he has shown a remarkable level of durability as shown in his second battle with Helbram. It was believed that King was able to control the Sacred Tree a long time ago and with it draw out the true power of a fairy, but the tree abandoned King for an unknown reason. This was later proven to be false as the Sacred Tree has no evil intentions at all and it was King who did not want to fully utilize the Sacred Tree’s powers.

But, King does get a power up (although not technically a physical strength power up), and it is good to consider the fact that he is extremely fast as well.

Here’s how they finish off his abilities section, which will lead us into our workout:

After going through the trial and his wings finally growing, King’s power increased greatly, being able to freely access the true power of the Sacred Tree and his Sacred Treasure. Melascula states that his power became comparable to Gloxinia’s. Gloxinia himself remarked that despite King’s wings have only barely grown, he can wield his spirit spear on par with himself and thus would be capable of surpassing the first Fairy King and even becoming the most powerful Fairy King in all of history. This statement was later proven to be true, as after breaking Mael’s seal and having his wings fully grown, his true potential was awakened, not only changing his appearance but the strength and quality of his powers greatly. This allowed him to not only overpower Mael with his Chastiefol but also to also use multiple Chastiefol forms simultaneously; for both offensive and defensive purposes, as he easily overwhelmed Mael in their fight while simultaneously protecting and defending Diane and everyone else from further harm during the battle.

King is extremely fast, as shown when he not only effortlessly evaded the attacks of both Guila and Jericho simultaneously but also knocked them unconscious before either of them could realize it. He is also able to keep up with fellow Sins Meliodas and Ban in terms of speed. Despite lacking physical strength, King possesses a remarkable level of durability and endurance as shown in the Kingdom Infiltration arc where he not only fought and defeated Helbram but also pinned down Dreyfus immediately after, despite the injuries he sustained against Helbram.

As you can see they mention his speed there and we also know that in his final form with full wings King also takes on a much more adult appearance with slim and toned physique.

For that reason we’ll be building this one around those qualities, and I’ll be pulling right from our Assassin Calisthenics 90 Day System, which has even been used to help train new U.S. Marines.

But, don’t worry, we’re going to be working with a much more scaled version and adding a lot of King flair to it!

We’re going to be revolving this one around a split we normally don’t utilize with our calisthenics training, but we’ll be doing an upper, low, full body split, with core, holds and cardio in there as well.