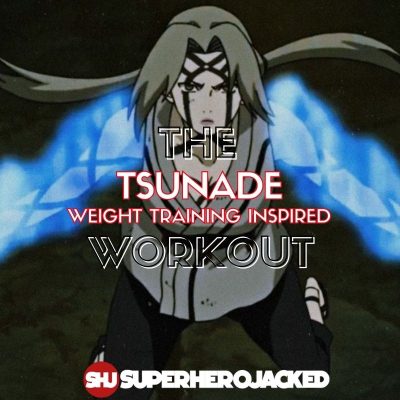 We’ve already had Tsunade join our Naruto Inspired Workouts but in the form of a hyper-scalable beginner styled calisthenics workout a LONG time ago.

Now we’re back to train like Grandma Tsunade but to her full strength, with weight training built around not only her physique but also her abilities.

If you want a much more basic routine you can check out Tsunade’s original workout – but now we also have a full Calisthenics Workouts Database with hundreds of workout routines as well.

Tsunade is fan favorite, but we’re definitely going to be bringing in even more Naruto female characters – although we do have tons already!

Her weight training routine will make a great addition to our Naruto Workout Placement Quiz.

Tsunade falls right in around the average height we’ve seen among anime female characters within our Anime Workouts Database.

Her weight range also falls fairly in line with her slim and toned physique. Even though we’ve already seen Tsunade here at SHJ I’m still going to be pulling information from her Wiki Fandom page again here, starting with this:

Tsunade is a descendant of the Senju and Uzumaki Clan, and is one of Konohagakure’s Sannin. She is famed as the world’s strongest kunoichi and its greatest medical-nin. The repeated loss of her loved ones caused Tsunade to later abandon the life of a shinobi for many years. She is eventually persuaded to return to Konoha and take on the mantle of Fifth Hokage, where her skills prove invaluable to the village.

When we move on from there we have a long list of Tsunade’s powers and abilities.

Here’s how they start us off with a section about her overall abilities:

Like other students of the Third Hokage, Tsunade is an exceptionally talented shinobi. Her skills became well known following the Second Shinobi World War when dubbed by Hanzō as a Sannin, alongside Jiraiya and Orochimaru. Tsunade’s skills are popularly held as the reason for Konoha’s victory during that war, and in the years following, became known as the world’s strongest kunoichi. Despite being rusty, Tsunade’s skills easily outclassed Kabuto Yakushi’s when they battled, with him having to rely on using a Military Rations Pill to continue battling, and use her fear of blood against her to gain the upper hand. Upon overcoming this, she fought Orochimaru one on one and defeated him near single-handedly. She would later go on to become Konoha’s Fifth Hokage, and was responsible for saving countless villagers when Pain decimated the village in Part II. Even the likes of Madara Uchiha admits that Tsunade was worthy of being a Kage.

If being the Fifth Hokage wasn’t proof enough, this breakdown of her overall skills should get you closer to understanding just how strong she is.

From there we can move into her physical prowess and chakra, which they start by breaking down as follows:

As a descendant of both the Senju and Uzumaki Clans, Tsunade inherited their life force and physical energy, enabling her to not only battle the likes of Madara Uchiha for over half a day without exhaustion, but even survive being bisected and retain consciousness long enough to heal others before being healed herself. Her reserves of chakra are immense, enough to heal several thousand shinobi during the final battle with Obito Uchiha. She also has excellent control over her chakra. After the Second Shinobi World War, she started gradually storing her chakra into the Strength of a Hundred Seal on her forehead. When the seal is released, Tsunade has access to all the accumulated chakra, totaling a so-named hundred-times her usual chakra levels. Although she normally uses this extra chakra to heal injuries or perform her other jutsu, she can also transfer the chakra to others, either to replenish or amplify their own.

They also move on to state this:

Tsunade teaches her student, Sakura Haruno, how to build up chakra in her fists and release it on contact with a target, causing severe damage. Tsunade presumably uses this ability herself, but it isn’t always clear when since she is naturally very strong, enough to lift Gamabunta’s sword and was noted by Hashirama to have possessed immense strength even when only a few years old. Her physical accomplishments, whatever the cause, include: splitting the ground with only a finger and breaking six of Jiraiya’s ribs, both his arms, and rupturing several of his internal organs. She has even broke through Susanoo, an “absolute defense”, with only a few hits.

Tsunade believes it is vital for a medical-nin to avoid injury, as they cannot perform their duties if anything happens to them. To a certain extent, her unnatural strength helps her in this regard, as opponents may avoid getting near her so that she cannot strike them. At the same time, though, Tsunade is regularly injured in combat, even going so far as to place herself in harm’s way in order to protect her allies. This is all because Tsunade deems her Creation Rebirth ability a reasonable exception to the “avoid injury” tenet, as she can receive serious damage and still survive. Even without the Creation Rebirth, Tsunade’s ability to endure injury is quite impressive, as she can survive several mortal stabs to the chest and remain able to perform jutsu after being bisected.

We probably won’t be able to split the ground with only a finger, or able to break Jiraiya’s ribs and arms – BUT, we’ll still be working around incredible Tsunade-like strength for this one.

Here’s exactly what we’ll be working with for this one:

So be ready for high volume, intensity and a mix of different training styles.

For this one we’re going to be training with a 3 day split of full body workouts and then one day will be used to build up chakra endurance and a final day devoted to Tsunade Healing Circuit. You can use that weekly, biweekly or monthly and sub endurance or rest on weeks you don’t.