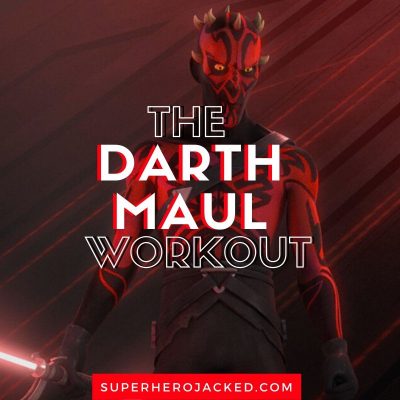 From a Clone Troopers Workout to a Darth Maul Workout.

We have a Star Wars Inspired Workout Listicle that has 20+ celebrities and character workout routines; but this week needed a bit more being that our May 4th and 5th just passed!

So with everyone binge watching all the movies (the newest being officially added to Disney+), and finishing up their final seasons of Clone Wars; Darth Maul felt like he was the next best addition.

He also struts a physique and style that seems to perfectly fit something we can work into our bodyweight and calisthenics theme that we’ve had since our Ultimate Calisthenics Workout & Guide was posted.

Darth Maul is actually quite tall.

I wasn’t expecting it (likely because there’s some part of the movie he looks quite short), but he’s said to be 1.94 meters! 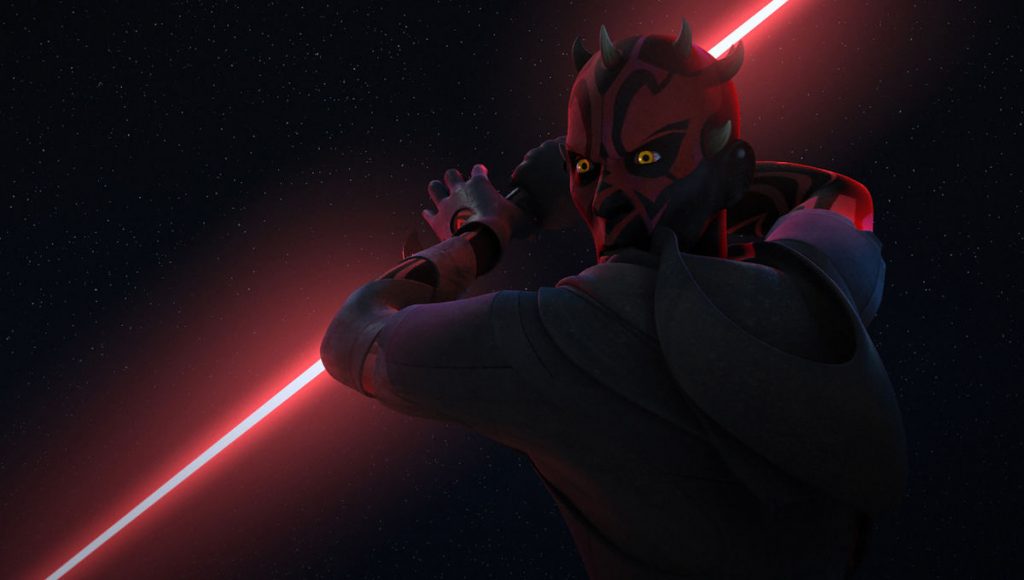 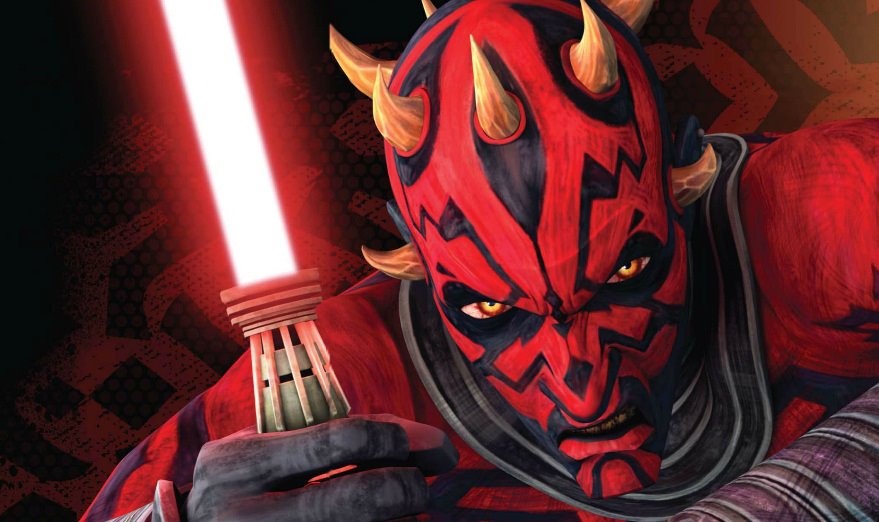 The best place to start for this one is with a brief background.

Here’s what his Star Wars Wiki Fandom page tells us:

Maul was a Force-sensitive Dathomirian Zabrak male and dark side warrior who served as the apprentice Dark Lord of the Sith Darth Maul during the final years of the Galactic Republic and reigned as a crime lord during the rule of the Galactic Empire. The son of Mother Talzin of the Nightsisters, he was taken at a young age by the Dark Lord of the Sith Darth Sidious, who anointed him his first Sith apprentice, Darth Maul. Through his training, Maul grew strong in the dark side of the Force, becoming an expert lightsaber duelist and assassin who yearned to reveal the Sith’s continued survival to the Jedi Order. During the crisis on Naboo in 32 BBY, Maul confronted Jedi Master Qui-Gon Jinn and Padawan Obi-Wan Kenobi. Although he succeeded in killing the former, Maul was defeated and maimed by Jinn’s apprentice, who left the Sith Lord for dead. As a result of Maul’s defeat and apparent death, Sidious replaced him with Count Dooku, Jinn’s Jedi mentor who adopted the Sith persona of Darth Tyranus.

His Wiki Fandom also continues on to tell us a ton of information about his Lightsaber Skills and his Powers/Abilities with The Force.

I could have cut a bunch of information from his Lightsaber Skill section, but it’s such a good read I decided I want to share more than half of it:

As the apprentice of Darth Sidious, Maul was trained to be a living weapon of the Sith, one intended to help Sidious bring about the destruction of the Jedi and take over the galaxy. One of the deadliest, most efficiently trained Sith in the Order’s history. He became an acrobatic and highly trained Sith warrior, one who could relentlessly pursue his enemies while utilizing his double-bladed lightsaber. Indeed, Maul had been trained in several forms of lightsaber combat. During his duel on Naboo against Jinn and Kenobi, he demonstrated the ability to fight both the Jedi Master and his apprentice simultaneously on equal grounds as well as overpower Kenobi after he killed Jinn. Though Kenobi defeated Maul, this was due to Maul’s own hubris and neglect for the fallen Jinn’s lightsaber. He later outmatched Kenobi in a number of encounters after emerging from exile, including the fight over Raydonia, though their duel on Florrum ended in stalemate.

Maul was extremely skilled in unarmed combat, which he often integrated into his fighting style. This was most notable when he defeated an armed Pre Vizla with little to no assistance from the Force.

Maul also displayed considerable skill in Jar’Kai, holding his own against Jinn and Kenobi simultaneously on Naboo before splitting them up. He even put up a reasonable fight against Darth Sidious on Mandalore when they dueled with dual blades, going as far as landing a kick on the Dark Lord. After the Clone Wars, Maul demonstrated the ability to wield an additional weapon alongside his double-bladed lightsaber, on one occasion using a walking stick as a club in conjunction with his connected blades.

And, as far as Force Powers, which we have another section of in-depth information.

But for this one I’m not cutting it in half!

You’re getting the whole thing.

In addition to his expertise with a lightsaber, Maul proved to be very strong with the Force, strong enough to survive being cut in half. This, in Maul’s belief, had been due to his hatred of Kenobi and Sidious’ training. Before his defeat on Naboo, Maul preferred to use the Force for tactical assistance, such as breaking tree branches to crush a rathtar, killing Zek Peiro by piercing him with debris, or using the Force to suffocate an enemy with his cloak, though when pressed he relied on the Force to pressure opponents, like pushing Kenobi over the edge of a reactor. Following his restoration by Talzin, Maul used the Force in active combat much more liberally and frequently.

During a skirmish on Florrum, Maul used a Force push powerful enough to blast Obi-Wan Kenobi over a long distance and cause the tunnel they were in to collapse. He was later able to telekinetically drag an Eta-class shuttle from a plateau immediately after sustaining heavy injuries resulting in the loss of one of his cybernetic legs. During his time on Mandalore, he was able to Force choke Satine Kryze to the point where he could hold her in midair without a hand gesture, a testament to his continued development. During the Battle of Zanbar, he unleashed a massive Force Wave that swept away many battle droids. Shortly after his capture during the Siege of Mandalore, Maul was released by Ahsoka Tano when Order 66 was issued and the clones turned against her. After being released, Maul murdered several clones using only his telekinetic abilities, tearing panels off the walls to defend himself from the shots and crush and decapitate the clones. Over a decade later, Maul told Ezra Bridger that his advanced age had diminished his abilities. However, this was later revealed to have been a deception meant to gain the boy’s trust. Indeed, Maul had been able to Force Grip the Seventh Sister against her active resistance while simultaneously killing her with a Saber Throw.

Maul was also skilled in mind-probing, as shown when he used the power on Hera to find the location of Kanan Jarrus’ Jedi holocron and his true identity; he had even succeeded in using the technique on Obi-Wan Kenobi prior to their final duel, discovering the existence of Luke Skywalker. It is not improbable that he employed it on Ahsoka Tano, learning much about her past, and it was likely that he probed the minds of the Inquisitors to decipher their intentions and the name of their master. Maul was also familiar with the magick practices of the Nightsisters, including a scrying spell which involved two people sharing a potion of magical ichor. He was able to manipulate the Force-bond he gained with Ezra Bridger as a result of holocron fusion to cause the young Jedi to hallucinate. He also used the fragment of a Sith holocron to activate Kanan’s Jedi holocron and the Malachor Sith holocron as part of a plot to trick Ezra into luring Kenobi out of hiding.

Even so, by the time of the Clone Wars, Maul’s Force powers were still outclassed by those of Sidious, as the Dark Lord telekinetically pinned both him and Opress to a wall with no visible effort. But, as Maul had grown more powerful, Sidious nonetheless considered him to be a rival. Darth Tyranus evidently thought rather highly of Maul, as he at one time referred to his predecessor as a great Sith Lord. Obi-Wan Kenobi, prior to his and Maul’s final duel, said that his old enemy had the power to “alter the course of many things,” which would indicate Maul’s vast knowledge of the dark side.

If anyone got the irony of my cuts above and how I worded it (puns intended): thank you!

Darth Maul has a slender and fit physique, and an incredible style when it comes to his lightsaber form.

So for this one we’re going to be building our routine about being slimming out, and having a strong, but slender physique, while being able to utilize acrobatic type movements as if we were training for parkour.

I’ll also share some of the lightsaber style training that we’ve seen in our Yoda workout routine.

**I will share resources for your Cardio, Lightsaber Training, Parkour and Optional MMA at the end with your Jump Rope Circuit.**

Scale this by completing them as sets, or supersets, instead of a circuit.

While wearing a 20 lb. weighted vest.

For scaling help check out The Ultimate Calisthenics Workout & Guide. 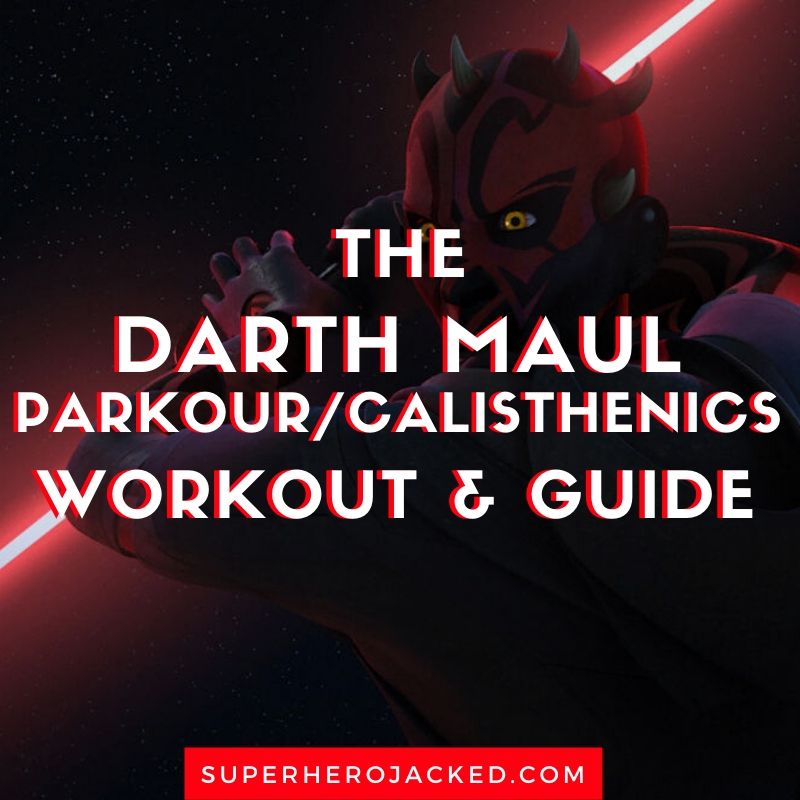 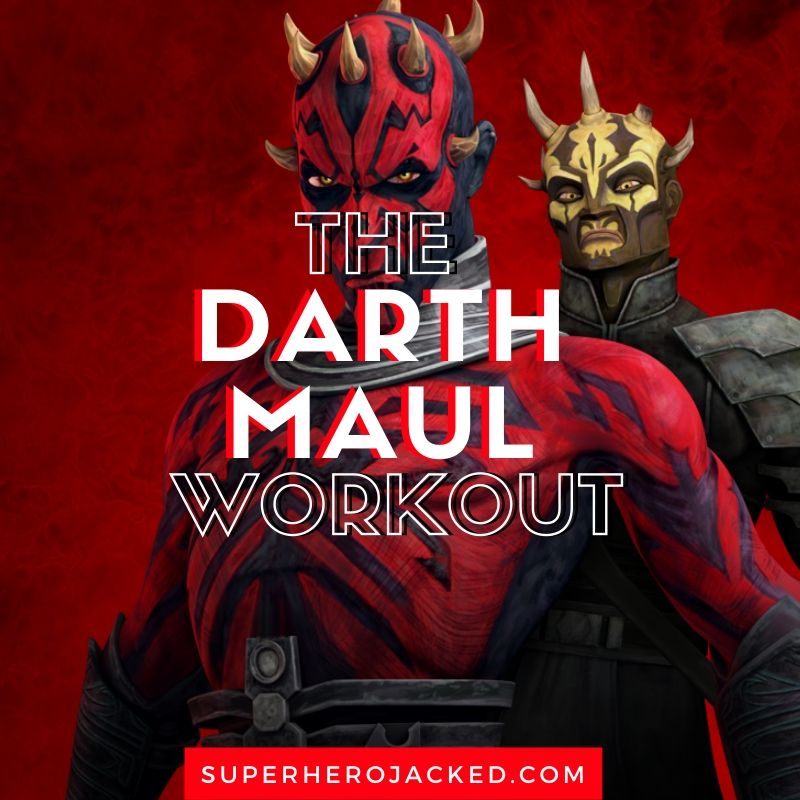