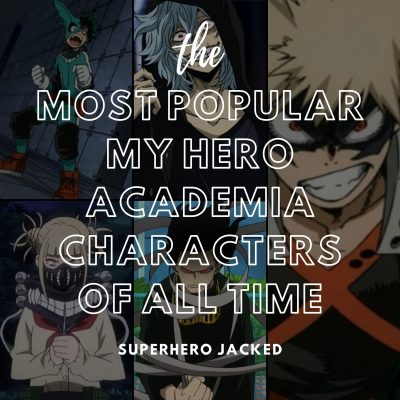 The Most Popular My Hero Academia Characters of All Time are actually not far off my own list of favorites.

The top three to five is a bit off, but not by much.

We recently got a My Hero Academia Workout Database which is a mini-database to hold all our MHA Inspired Workout Routines being that our MHA characters have been so popular here at SHJ.

Since then we’ve also had a couple awesome listicles based on our characters that you guys have loved enough for me to warrant me keeping them coming.

These lists are not only super fun, but they also help you guys find characters we’ve built routines based on that you may have otherwise not noticed were in our Anime Workouts Database.

For this list I’m going to be keeping out any of my own personal biases towards these characters and completely basing it on fan polls done in both US and Japan!

I tallied up votes, averaged them all out and this list is a product of all of it put together and sorted!

There were seven different votes in Japan and a couple in the US, so I made sure to account for everything fairly and averaged out accordingly.

That being said, I’m sure we’re going to have a ton of other MHA characters show up here, but if you’re an anime lover like I am: here are some other awesome listicles you may like:

That’s enough hype, though; let’s get into the list!

MOST POPULAR MY HERO ACADEMIA CHARACTERS

Asui was in the top ten most popular MHA character votes in the first handful among both the US and Japan but then fell off quite a bit as a ton of new characters were introduced and stole the show a bit!

Asui is a fun and loveable character not only because she’s sweet, but also because she’s also got some pretty awesome powers underneath it all!

I was actually surprised Mirio wasn’t higher up on the list once he started becoming a more prominent character. I was sure I was going to see him in top 3-5 characters in the later votes, but I suppose that’s my own personal bias.

That being said: Mirio is in The Big 3 at U.A. High School and was originally the top choice to become All Might’s successor before Deku!

His Quirk is extremely strong, BUT that’s only because of how much work he has put in to make it that way.  It could have just as easily been useless had he not mastered it and shaped it to be his own.

How could you not love Uraraka?

She’s a team player, there’s a connection we all love to watch between her and Deku, and she has so much drive and potential. It’s no wonder she’s a fan favorite and her placement in the top 15 has been pretty consistent!

It’s hard not to love Toga and the quirkiness that’s built into her character even while she’s always up to no good!

Her Quirk allows her to transform into a physical lookalike of other characters, she has an odd flirtation built into everything she does (especially her interactions with Deku), and the fact that it’s an anime and inherently has it’s extra glimpse of sexuality just makes it that much worse (or better!?) for Toga lovers.

Quirk: One For All

I was actually super surprised that All Might wasn’t going to make the top ten.  I will admit that part of me wanted to cheat a little bit and just give him a bump up a slot, but I decided to keep it super fair!

All Might, regardless of losing his power by handing it down to Deku or not, will forever be that Symbol of Peace during his reign with One For All!

I find Momo’s Quirk to be SO cool. Not only does she replicate some of that sexuality quirkiness that I talked about when I mentioned Toga, but she also is a leader, super smart, and pretty powerful!

I think Momo’s overall character development is a lot of fun already, and I’m excited to see more out of her character.

Quirk: Decay / All For One

Shigaraki is SUPER popular in Japan, especially the last three votes that came in during the later seasons and episodes.  The US also finds him in the top 15, even when there are a ton of other characters coming in to compete against, which gives him his ninth slot overall.

Let’s be honest: Endeavor was never going to beat out Hawk on the popularity chart.

BUT, Endeavor is learning to not only be a hero when it comes to brute strength and power, but also in the sense that he is really stepping it up a notch and showing the people that he can protect them and potentially take All Might’s slot.

Speaking of soaring to the top of lists: Hawks is the youngest [high] ranked pro hero and is ranked SECOND just behind Endeavor after All Might’s retirement.

Hawks just had to slip by one slot above Endeavor in our rankings as well.  He has a flair as the youngest, and also his Quirk gives him another advantage of looking cool while acting cool; which makes it pretty easy to rank high on the popularity charts.

If you don’t like Eraser Head, I’m not sure what to tell you.  He’s awesome. It’s not a question.

Eraser Head is the homeroom teacher of Class 1A at U.A. High School, and we’ve been lucky enough to see him fight a lot!

Not only is he extremely powerful, and we see this multiple times throughout the show, but he’s also a fan favorite, coming in as the most popular adult hero on The Most Popular My Hero Academia characters of all time (the rest are students).

Not only is Tenya Iida super fast, but he’s also super cool….in a smart inspiring leader type of way.

Iida comes into Class 1-A EXTREMELY drive and is ready to share that with his classmates to help them succeed.  He even uses that drive to go after his brother’s attacker: Hero Killer: Stain, which isn’t the smartest thing he’s ever done; but still shows the type of person Iida is when it comes to his friends and family.

I’m not going to lie to you guys: I think Kirishima is extremely funny, and really cool – BUT, I don’t think he deserves to come in at the four slot.

There are SO many other characters that I think could come in on this list that didn’t make it, and Kirishima DOES deserve a top 10-15, but 4 is so so high up.

That being said, he was one of the top requested characters going into My Hero Academia inspired workout routines, so there’s no denying his popularity among the MHA fanbase.

He is extremely powerful, as his father intended, and with the help of Deku he’s learning that his powers are HIS, and not his father’s.

Watching him learn to love himself for who he is, regardless of what his father wants or does, is something that makes his role in MHA special.

Quirk: All For One

I thought Deku was going to be an obvious number one, but I suppose I should have known better. Deku was clearly coming in top three, regardless, as he is the main character and this is his story we are watching…BUT he does have one character that ranks above him every so slightly.

The duo goes head to head on power level quite a bit as Deku continuously levels up, but we’ll have to keep watching to see just how strong each of them can really get.

Coming in as the most popular My Hero Academia character of all time is Bakugo!

I’m curious to know how many of you consider Bakugo your absolute favorite MHA character OR saw this one coming. Bakugo is definitely a loveable character through all his badassery and never backing down.  His Quirk: Explosion makes him high flying, explosive, and just extremely fun to watch. He’s also loud and powerful, making him an obvious choice for MHA fans.

The Most Popular My Hero Academia Character of All Time (Runner Ups):