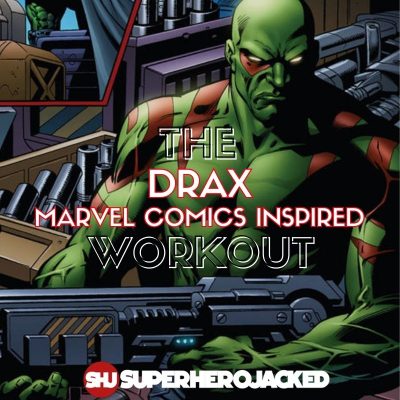 It’s actually a bit crazy that we haven’t add Drax to our Marvel Inspired Workouts here at SHJ yet.

Drax is obviously JACKED and is also a fan favorite.

Of course we’ve seen our Dave Bautista Workout within our Celebrity Workouts and research, and he was even a big case study within my book Superhuman Secrets – but now it’s time to bring Drax in to train like the character we all love.

Full disclosure: you will not become green, or bald, by using this workout routine.

When we talk about anime characters it’s easier for them to make some of the top ten lists here on the site being that we hone in on that specific manga or show.

For Drax, though, it’s a bit harder when you account for the entire MCU – so he unfortunately didn’t come in on any of our most powerful or popular lists.

That being said, Drax is one of the characters I’m most excited for to be adding to our Superhero Workouts and even our Marvel Workout Placement Quiz.

Drax is huge. At 680 pounds he stands in at the same height as Dwayne Johnson, but with over 400 pounds on him. 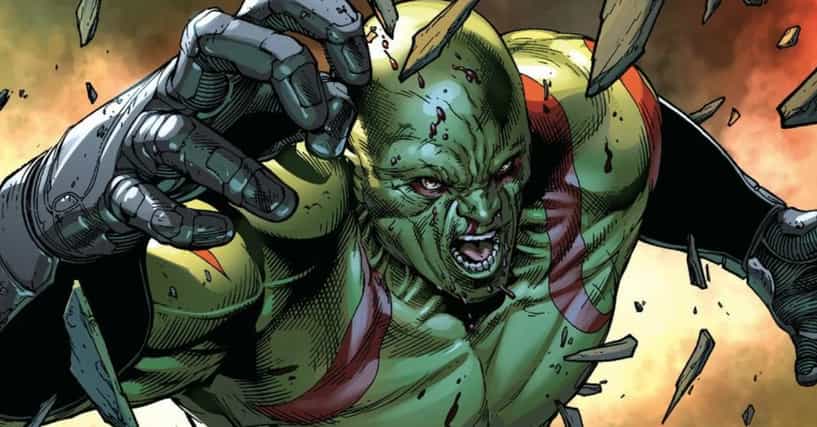 To learn more about Drax we’re going to be pulling right from his Wiki Fandom page, starting with a brief bio about his early life as Arthur Douglas:

Real estate agent Arthur Douglas, his wife Yvette, and daughter Heather, were driving across the Mojave Desert from Las Vegas to Los Angeles when a spaceship carrying the mad Titan named Thanos passed overhead on a surveillance mission to Earth. Wishing to keep his existence a secret, Thanos destroyed the automobile in case its passengers had seen his ship, and then landed to make certain they were dead. Satisfied that they were, Thanos left. Unknown to the Titan, his father Mentor had been monitoring his activities on Earth to examine his son’s latest handiwork. Mentor discovered that Heather Douglas was still alive, and took her back to Titan to be raised. She later returned to Earth as Moondragon.

From there his bio immediately goes on to how he gets on his mission to destroy Thanos, which is also relevant enough to the story of how and why we’re going to be building out this routine.

Mentor determined that the threat of his son Thanos could no longer be ignored and wanted to create a being of sufficient power to defeat Thanos. Enlisting the aid of his father Kronos, who millennia before had become a discorporate wraith, Mentor had Kronos seize the astral form (living consciousness) of Arthur Douglas before it had completely fled from Douglas’s body. Kronos and Mentor then fashioned a humanoid body from the Earth’s soil, granted it superhuman powers, and cast Douglas’ spirit inside it. Thus they created the being who would become known as Drax the Destroyer. From the moment he was created to be Thanos’ nemesis, Drax became an Avatar of Life.

From there the mission has started and we can begin moving on into his powers and abilities, starting with the Avatar of Life:

Avatar of Life: After being resurrected by Kronos, Arthur Douglas’s spirit was outfitted into an artificial body by the cosmic entity in order to be able to battle Thanos. Because of this event, he is considered an Avatar of Life.

We will not be getting any artificial bodies by using this workout, hence the fact that you will not instantly become green or bald by completing it.

Although this routine WILL have you on the track to jacked.

With Drax’s artificial body (which I’ll describe below), he gets a ton of his abilities:

Artificial Body: Kronos had outfitted Arthur in an artificial body and has even empowered it over the years to varying degrees; however, for an unexplained reason, he was later seemingly killed but instead regenerated in a slimmer, smaller body.

The abilities that come with this are really what we’re going to be working with to build this one out.

You’re going to have to work on the superhuman senses – and we also won’t be getting any regenerative healing factor (sorry) – but the rest is on the table.

That means we’ll specifically be building this one out to get HUGE like Drax, with enhanced strength and stamina.

So be ready to lift heavy weight at a high volume to transform into The Destroyer!

We’re dealing with THE DESTROYER.  We need to be massive, strong, and extremely powerful.  For that reason we’ll be working with a 6 day split that puts strength first and endurance secondary as the priorities and goals.  This is high volume, so feel free to cut and scale where needed.

Friday: Destroyer Back and Endurance Work