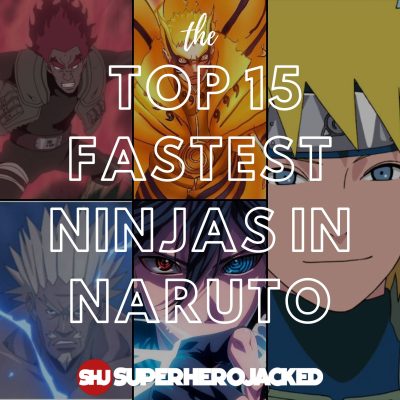 The Fastest Ninjas in Naruto have a lot of the same characters from our list of The Most Popular Naruto characters, but with a few new characters sprinkled in [based on their speed]!

The characters on the top fifteen deserve their slot, but the speeds they can move at are just so far apart, and there are just SO MANY insanely fast characters that even our runner-up section at the bottom of this article was hard to finalize.

I mean, if you think about ninjas in anime, a lot of them are actually really quick, so determining who the fastest ninjas are is actually quite difficult to do.

Thankfully, there are a handful of standout frontrunners that made SOME aspects of this list a little easier.

But, before I rant about the agility of these characters on the show too much (might have already done that), I do want to point out that Naruto is one of the most popular shows for inspired workout requests here on the site.

For this one, I scoured the internet for help and almost every single listicle has a different take on who The Fastest Ninjas in Naruto are so what I decided to do was compile ALL of them together and place each character in the slot they averaged most as well as keeping the list to base FIFTEEN fastest and then increasing the length of the normal runner-up slots I normally do in no specific order.

Starting our list of Fastest Ninjas in Naruto, we have the Mother of Chakra herself, Kaguya Otsutsuki. Kaguya was the first-ever chakra user and is capable of gaining strength by absorbing chakra. When it comes to speed, she’s able to move quite quickly, appearing before Sakura without the latter sensing her approach and was even fast enough to evade Sasuke’s teleportation-initiated Chidori.

Coming in and making it to fourteenth place is the brother of Hinata, and one of the smartest ninjas in the Hidden Leaf Village, Neji Hyuga! Neji is not only one of the brightest ninjas in the village but is also one of the fastest ninjas. His agility makes him a danger to fight in close combat, so many opponents prefer to fight him from a distance. Thanks to his speed, reflexes, and coordination, Neji can easily dodge any attack and at the same time deliver incredibly fast counterattacks.

Hero or Villain: Hero (Kind Of)

At number thirteen among the fastest ninjas in Naruto, we have Hashirama Senju; our first Senju to grace this list our of two. And, if you’re a Naruto fan reading this list about the speedsters, you likely know who the other one is.

Hashirama was hailed as “The God of Shinobi” and his Wiki Fandom mentions that “Madara, another legendary shinobi openly admitted inferiority to Hashirama throughout their entire lifetime together” – which almost had me swapping their placement for a second….

Coming in at number twelve is the ninja who was formerly known as the fastest ninja after Minato’s death, A, the Fourth Raikage! A is naturally fast and can intercept an opponent’s attack before they even realize that he is about to attack. Thanks to his training under his father, The Third Raikage, he is able to do lightning, earth, and water release, which allows him to enhance his skills in battle and move at incredible speeds.

Coming in at number eleven is the brother of Sasuke, and a member of the Akatsuki, Itachi Uchiha! As a member of the Uchiha clan, he is naturally strong and gifted in the use of ninjutsu. Add to that his training in the ninja academy and Itachi is a force to be reckoned with. His hand movements, especially in battle, are so fast that he can produce one-handed seals others couldn’t see or comprehend.

In tenth place in our list of fastest ninjas in Naruto, we have Kakashi’s former cohort and friend, Obito Uchiha. Obito was trained by Madara Uchiha and endured several procedures to modify his body to make him stronger. Because of his modifications and his ninja training, he can move incredibly fast and can even keep up with Naruto’s Nine-Tails’ chakra mode.

Coming in at number nine on the list of the fastest ninjas in Naruto is the Second Hokage, Tobirama Senju! Tobirama was fast enough that he could place explosive tags on his enemies and mark them for his Space-Time Ninjutsu all unnoticed by his opponents. He was considered the fastest shinobi during his lifetime. He was also able to use all five basic nature releases. Using the Flying God Thunder technique, he could instantly teleport himself or his opponent to a different location.

At number eight among the fastest ninjas in Naruto is Naruto’s sensei and the Sixth Hokage of Konoha, Kakashi Hatake! Kakashi is widely known as the Copy Ninja because he has observed and is able to replicate thousands of different ninjutsu. Thanks to his time serving in the Anbu, he has gained the ability to move behind an opponent unseen and is agile enough to perform hand seals without anyone noticing. Also, thanks to his constant friendly fights with Might Guy, he is comfortable with performing full-frontal attacks at high speeds and deadly precision.

Next up among our fastest ninjas in Naruto is our third Uchiha, Shisui! Shisui was known as “Shisui of the Body Flicker” for his ability to disappear into thin air without any indication of the direction he moved in. His mastery of this technique allowed him to leave multiple after-images that could deal actual physical damage to his opponents. His speed was so high that he could dodge and evade multiple projectiles thrown by his enemies. What’s more is that his agility lent to his stealth, being unable to be sensed even by sensor ninjas.

Just missing the top five and coming in at number six among the fastest ninjas in Naruto is the leader of the Uchiha clan, Madara! Madara was born with an incredibly powerful chakra and was able to perform complicated techniques using single-handed seals. His agility is that he was able to defeat thousands of enemies while dodging attacks from multiple directions, and he was able to attack Naruto even while he was in Sage mode.

Making it to the top five among the fastest ninjas in Naruto is the apprentice and protege of Might Guy, Rock Lee! As a Taijutsu expert, Rock Lee has trained his body to the highest levels under Guy’s tutelage and is capable of moving at speeds beyond normal human sight. Thanks to his ability of Drunken Fist and being able to open the 8 Gates, he is able to move blindingly fast and was able to save Guy from Madara’s Truth-Seeking Ball.

At number four among the fastest ninjas in Naruto is Rock Lee’s master, Might Guy!

Might Guy is the reason that Rock Lee is such a strong Taijutsu user. He himself has trained exhaustively and extensively using unorthodox training methods to reach the peak of physical fighting form. Even without opening any of the 8 Inner Gates, Guy moves fast enough to be undetected by his enemies before he attacks. After opening even just one Gate, Guy already moves faster than anyone’s eye can see and seems to move instantly from one point to another.

Coming in and making the top three among the fastest ninjas in Naruto is Naruto’s childhood rival and close friend, Sasuke Uchiha! Sasuke was already talented in the use of Taijutsu even at a young age, and when he fully re-awakened his Sharingan, he was able to access even more speed and his reaction times became even faster. Thanks to these improvements, his enemies are hard-pressed to find enough time to do hand seals when fighting him.

I should make a point to say: Naruto is the most powerful human in the series.

Naruto was already a fast ninja thanks to his training in the Academy and his continued training under Kakashi and Jiraiya honed his physical abilities, especially his agility, to incredible levels. After harmonizing with Kurama, Naruto is able to achieve speeds that most ninja can’t reach. Truly, he is his father’s son as he continues to reach new levels of ability and become an even greater ninja.

Coming in at number one among the fastest ninjas in Naruto is the Fourth Hokage of the Hidden Leaf Village, Minato!

Minato was known as the “Yellow Flash” because his fighting style revolved around appearing and disappearing so quickly. He was able to defeat 1,000 Iwagakure shinobis and forced the Onoki to accept a treaty. He is considered to be the strongest shinobi of all time, unmatched by anyone during his time. He was the only one who was fast enough to contain the Nine-Tailed Fox when it attacked his village.

The Fastest Ninjas in Naruto of All Time (Runner Ups):

Now get out there and begin unleashing your inner superhuman!
—–
Until next time,