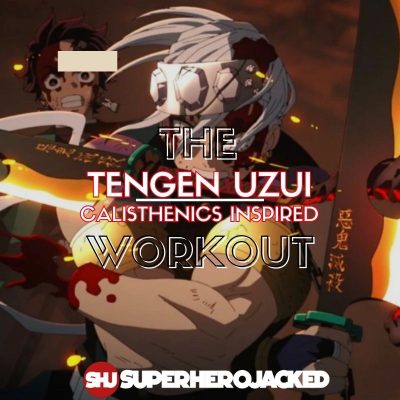 Prepare to get flashy.

We already have our original Tengen Inspired Workout among our Demon Slayer Inspired Workouts, but you guys want an extra flash calisthenics version since that original one was weight training!

And I think we can definitely do it.

I’ll be discussing this more below, but Tengen is super tall, and obviously jacked, but at 6’6 and only 209 pounds he really isn’t ginormous like some of the other monsters we’ve seen here at SHJ.

To compare to someone you guys will likely know well: Dwayne Johnson is 6’4 and over 240 pounds, meaning he is shorter, but has over 30 pounds on Tengen.

So a calisthenics workout to build muscle and toning to unlock the a flashy physique like our Sound Hashira is definitely something that can be optimal.

I’d even categorize him as one of the behemoths within our Anime Workouts Database. 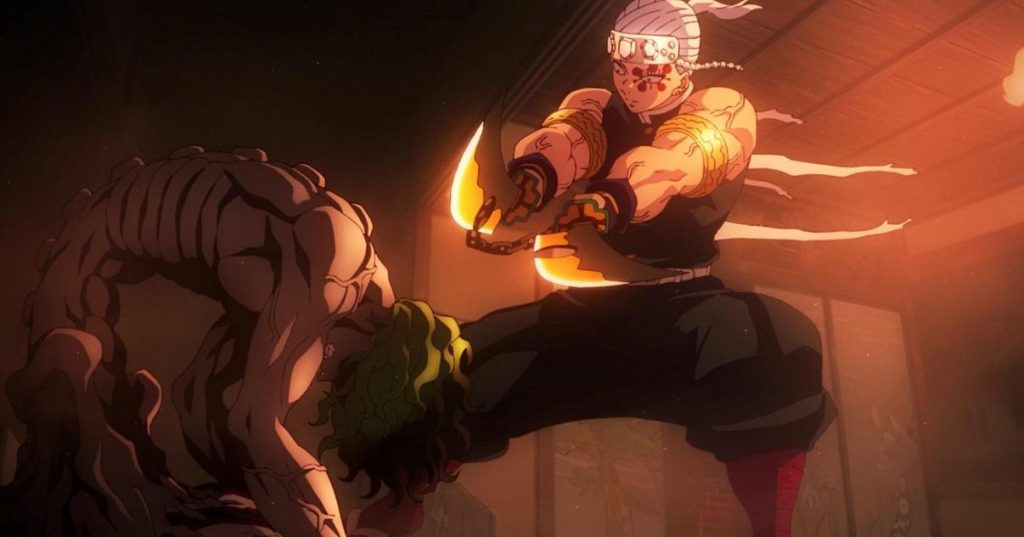 Even though we’ve already seen Tengen Uzui here at SHJ, we’re still going to be to be pulling from his Wiki Fandom page to know exactly what we’re working with.

Tengen Uzui is a major supporting character of Demon Slayer: Kimetsu no Yaiba and a major character in the Entertainment District Arc. He was a former member of the Demon Slayer Corps, standing as the previous Sound Hashira.

When we move into his powers and abilities section we’re going to begin to learn a lot more about what we’ll be working with here for this workout.

Here’s how they start us off with his overall abilities:

As a Hashira of the Demon Slayer Corps, Tengen is a very powerful and skilled combatant. He has displayed incredible physical feats of strength and speed, being the second physically strongest Hashira in the current generation as well as being the fastest runner out of all the Hashira. In terms of skill, he could match the combat proficiency of both Daki and Gyutaro, both Upper Rank demons that have fought and killed numerous Hashira in the past. Tengen was also able to effortlessly decapitate Daki without her realising it, to the point that he didn’t see her as an Upper Rank demon at all. Impressively, he was able to fend off the combined efforts of Daki and Gyutaro while being infected by a poison that would kill someone instantly under normal circumstances, even managing to protect bystanders in the process. Tengen has also showcased great skill and precision in using explosives, minimizing damage dealt to the surroundings and maximizing the damage dealt to his opponents. Due to his shinobi training, Tengen has greater tactical skills and sharper senses, especially his sense of hearing, which helped him greatly during the course of his battle. Even after losing his left hand to Gyutaro, Tengen was able to fight the Upper Rank on even terms due to completing the Musical Score, allowing him to deflect Gyutaro’s attacks, cut off his arm and pin him down at the cost of losing his left eye. But due to the poison circulating in his body, he was unable to attempt a finishing blow.

We already knew we were going to be working around strength and speed, but we’re going to emphasize that even more.

Here’s how they break down his strength, speed, and also endurance:

Immense Speed & Reflexes: Tengen is the fastest runner out of all the Hashira, and thus possesses tremendous levels of raw speed and reflexes, often shown when he moves so fast he appears to teleport. His speed also far surpasses that of Tanjiro, Zenitsu, and Inosuke, who were unable to keep up, let alone perceive, the Hashira’s blisteringly quick movements. Most notably, Tengen was fast enough to behead Daki, an Upper Rank demon, before she could even register what had happened. Moreover, he could fend off both Daki and the true Upper Rank Six, Gyutaro, despite being held back by a deadly poison that would’ve killed someone instantly under normal circumstances.

Immense Stamina & Endurance: Due to his upbringing being raised to become a ninja and his own father’s increased attempts to revive their clan by forcing Tengen and his siblings to train even more harshly and painfully then necessary, Tengen developed powerful resistance to pain, as seen where he bared little to no reaction at having being caught up in a hail of Kunai knives and being pierced by them without even flinching or showing any form of discomfort or pain, continuing to attack Gyutaro as if nothing had happened. Later, Tengen was also noted to have suffered other severe injuries during the battle, such as getting his eye and hand slashed off by Gyutaro, and managed to ignore the pain of such injuries as well.

Immense Strength: Tengen possesses tremendous physical strength that is greater than that of his Hashira brethren. In fact, Tengen was ranked second in an arm-wrestling contest among all the Hashira, with only Gyomei Himejima surpassing him. Tengen displayed his strength numerous times, as he was shown effortlessly carrying Aoi and Naho, and soon after knocked Zenitsu and Inosuke unconscious with a single punch to the stomach. Moreover, Tengen is able to fight at blistering speeds while carrying around his giant Nichirin cleavers, swinging them incessantly to fend off his opponents without much trouble and being able to hold both his enormous cleavers at their tip with only two fingers. Furthermore, Tengen was able to match Gyutaro in strength with only one arm after his left hand was cut off.

One thing I also want to add to this is Tengen’s shinobi training.

We’ve seen Makio and Suma as well, and this training makes our bodyweight version of Tengen’s training even more relevant.

Here’s how his Wiki Fandom breaks it down:

Shinobi Training: Before joining the Demon Slayer Corps and becoming a Hashira, Tengen was a ninja from a family of shinobi. Tengen received extremely harsh training that killed all his siblings except for his younger brother who became cold and heartless. However, as a result of his intensive shinobi training, Tengen possesses great technical skill in weaponry such as kunai and explosives. His training also made him extremely pain tolerant and poison resistant, which saved him from Gyutaro’s poison and allowed him to fight despite suffering numerous injuries and losing his hand.

So here’s what we’re working with for this routine:

That means you better be ready for some high volume calisthenics in order to build up to Tengen’s aesthetic.

For this one we’re going to have our Sound Hashira Calisthenics 3 days per week, and then we’ll also have 1 day devoted to a Flashy Circuit Test (you can do this weekly, biweekly or monthly and add endurance training on weeks you don’t), and 1 day devoted to extra Demon Slayer Endurance Work.