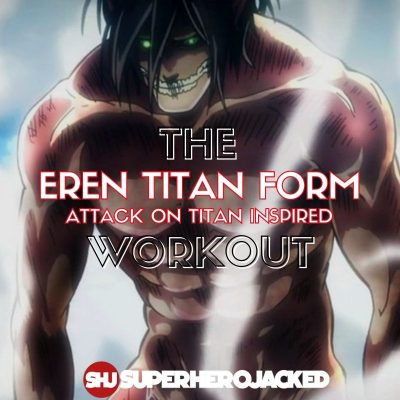 I didn’t want to write any workout routines based around titan forms within our Attack On Titan Inspired Workouts Database.

BUT, you guys in The SHJ Army are relentless with the requests, so here we are.

And, to be clear, the only reason I’m cracking and giving in is because we’re going to be able to build this one around an enormous, muscular physique – and an insane amount of strength.

Which is something I can definitely be a fan of creating for you guys.

That said, we’ve also had multiple routines based around Eren Yeager in the past:

So if you’re looking to train like Eren, but don’t want a routine based around his behemoth sized Titan form, you could start with one of those – or head into our Anime Workouts Database for hundreds of other routines.

To be fair, we don’t really care too much how tall Eren’s Titan Form is.

And we definitely don’t need to know the weight of his form, either. 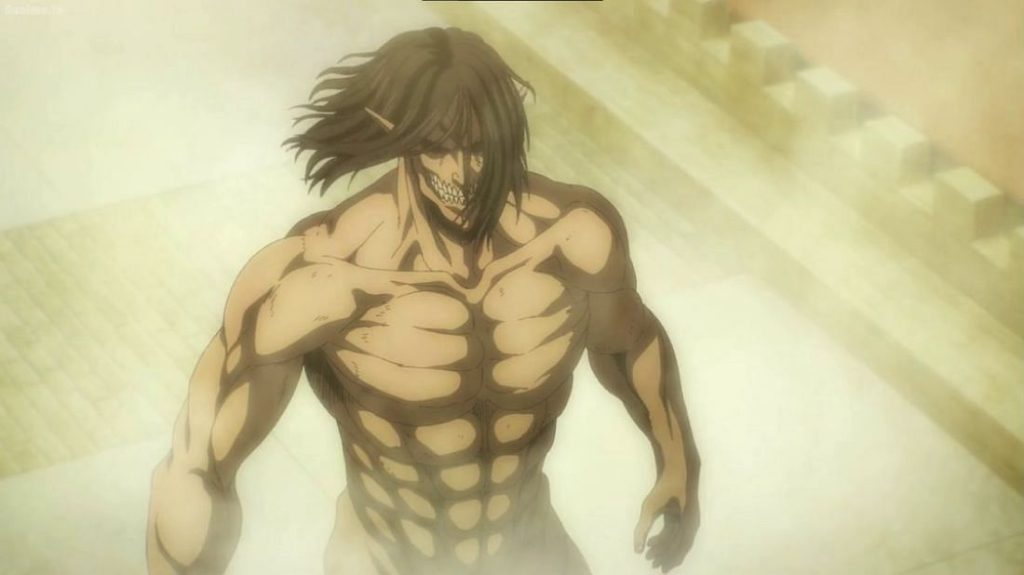 But, considering we’ve already had multiple articles covering his background and abilities as a whole, I’m going to lead off with a bit of a bio and then jump right into his Titan Form abilities.

Here’s how his Wiki Fandom starts us off:

Eren Yeager was a former member of the Survey Corps. He was the main protagonist of Attack on Titan. He lived in Shiganshina District with his parents until the fall of Wall Maria, where he impotently witnessed his mother being eaten by a Titan. This event would lead to Eren’s intense hatred towards the Titans as he swore to wipe all of them off the face of the Earth.

Soon afterward, his father, Grisha Yeager, found him and gave him the key to his basement, instructing Eren to find it at all costs and retake Wall Maria. He then injected Eren with a Titan serum.

In the year 847, Eren, Mikasa Ackerman, and Armin Arlert joined the 104th Training Corps. The three graduated with Eren ranking 5th best, and they joined the Survey Corps following the battle of Trost District.

After finding the basement and unlocking his father’s memories, Eren learned about the truth of what the Titans are, as well as the history of Eldia and Marley. Eren then vowed to free his home from their true enemy: the rest of humanity that lives across the ocean.

Eren possessed the power of three Titans. From his father, Eren inherited the Attack and Founding Titans. After eating Lara Tybur during the Raid on Liberio, he gained the War Hammer Titan as well.

This leads us off and gives us enough information on Eren, AND his Titan Form (and the power of three Titans), that I feel confident enough to move right into more about his Titan form(s).

Let’s start by going through some information about each individual Titan form being that we have never covered that information [individually] in our previous Eren articles.

Let’s start what they tell us about his Attack Titan Form:

Eren’s appearance changes quite drastically when he transformed into the Attack Titan. His height increased to 15 m, his hair grew long enough to graze his shoulders, and his tongue and ears became elongated. His facial features also underwent a transformation; he developed a prominent, hooked nose, his eyes became deeply sunken within their sockets, and his mouth took on an unusual, jagged shape that was unsuited for intelligible speech. Despite this, he was capable of howling and roaring in order to express his exhaustion and anger. In addition, he also lacked lips and flesh on his cheeks, so his teeth were exposed.

Similarly to past Attack Titan holders, Eren’s Titan form was well-proportioned and physically fit, sporting a well-defined, lean, and muscular appearance in lieu of the more common pot-bellied or emaciated appearances of regular Titans.

And from there they move onto the information about his Founding Titan:

Eren’s Founding Titan was drastically different than Ymir Fritz’s Founding Titan, or any other Titan for that matter. Initially, much of the Titan was shrouded by the steam from the Wall Titans, but its sheer size was immediately noted, towering over the horde of Wall Titans. What appeared to be the torso was devoid of flesh, resembling an enormous ribcage. The knobs of the backbone and ribs were grossly lengthened; the ribs reaching the ground while the arch of the spine extended far into the sky. The pelvis and legs were greatly undersized however, seemingly useless. Despite this, they were still taller than any Wall Titan.

Finally coming to the grand conclusion with his Pure Titan form:

Eren’s Pure Titan form was much shorter than his current Titan form. It was 4 m tall with short, rugged hair and a jagged, lipless mouth that exposed his teeth. His Pure Titan form also had a big head, elongated ears, and an overall stocky build.

If we move down into the powers and abilities section of Eren’s Wiki page we learn a lot more about each form, but for the sake of this section I’ll be pulling what we really want to know.

AKA, the things we can build this routine around:

Enhanced Strength: As a result of Eren’s Titan form being much more muscular than other Titans, he was much stronger in terms of physical strength. During his first transformation, Eren was able to decapitate a 15m Titan with a single punch and kill a 7m Titan with little effort. With both arms lost, he was also strong enough to bite into the neck of a large, abnormal Titan that ate Thomas and lift it up above his head. With enough force, Eren was able to throw the abnormal into another Titan hard enough to knock them both into a building. Against the Female Titan in the Titan Forest, Eren’s Titan form had enough physical force to leave large craters in the ground, as well as lift the Female Titan into the air with a punch. Ultimately, Eren’s greatest display of strength was when he lifted a giant boulder, albeit with difficulty, carried it across a large distance, and slammed it down to seal the hole in Trost’s gate, producing a large shock wave.

Enhanced Endurance: Perhaps Eren’s most notable trait of all was his ability to maintain levels of activity for an extended period of time. His first transformation carried on long enough to incapacitate 20 Titans in total. In battle, even after receiving massive amounts of damage from the Female Titan, Eren could carry on fighting, despite the handicaps that he suffered. He was also able to fight against the Armored Titan for a period of time and gain the upper hand. Eren’s endurance in his Titan form was enough to allow him to sustain the effort of hoisting a huge rock on his back, carry it over a large distance, and seal the hole in Trost’s gate shortly before collapsing. In Marley, Eren displayed exceptional improvement in his durability. He could transform into a Titan three times in one battle, surprising Galliard.

Which brings us right to our ultimate goals.

Our main priority goals for this workout are:

So be ready to train with weights as the primary training tool and then have some endurance work added in on top.

For this one we’re going to be working around a PPL (Push, Pull, Legs) Split for weight training to build the strength and mass, and then we’ll have a day devoted entirely to endurance and than a final Titan Form Circuit Test that can be completed weekly as well.