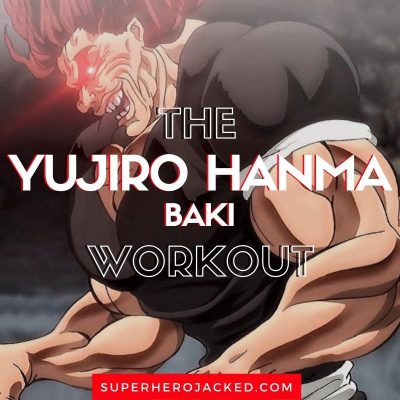 After seeing some calisthenics workouts from Avatar Universe characters this week, now it’s time to move into some weight training.

And by that, I mean we’re about to draw some inspiration from some MASSIVE anime characters, starting with a Yujiro Hanma Workout.

We started off with a new Azula Workout and Mako Workout and built them around bodyweight training, but we’re shooting back to two characters that were both honorable mentions on our new listicle: The Most Powerful Anime Characters of All Time!

While we were building up to that list we had some weeks with four anime workouts come in, but for the most part I try to stick to two a week, and sometimes we even swap out and only see comic heroes.

That being said, I thought we could give our Anime Workout Database some more love as anime fanboys and fangirls are currently flooding the site and joining The SHJ Army.

Plus, our Avatar characters technically don’t fall under the anime category…!

His 6’3 comes in an inch shorter than Dwayne Johnson, but he has over 60 lbs. on him! 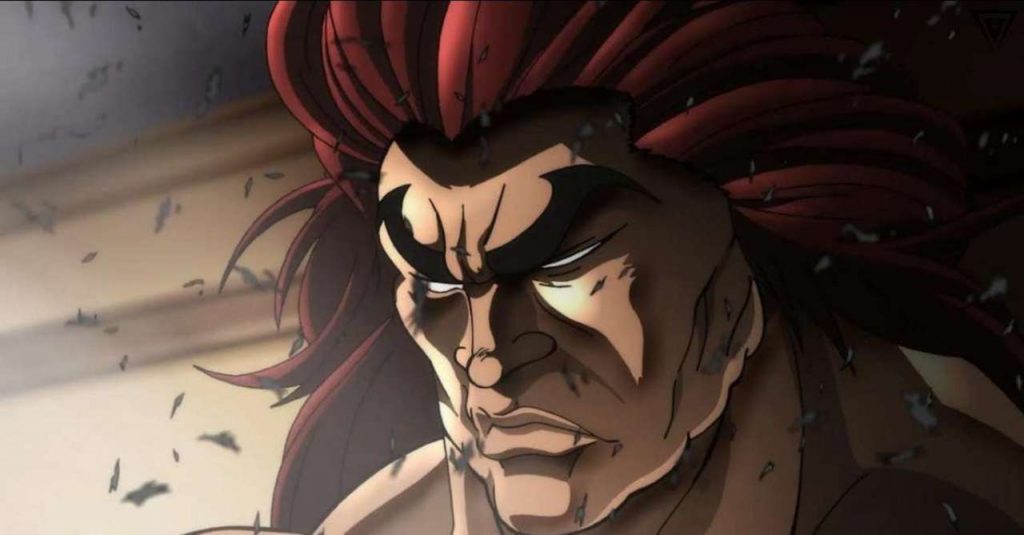 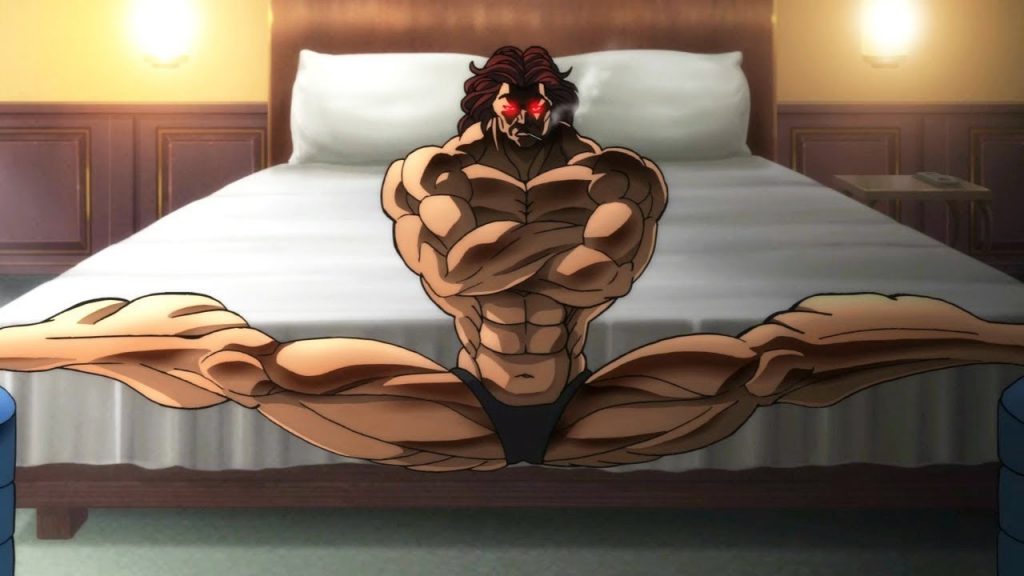 To start us off we’re going to be pulling right from Yujiro Hanma’s Wiki Fandom page to get a bit of a bio and learn just how strong he really is.

Yuujiro Hanma is Baki and Jack Hanma’s father. He is the primary antagonist of the Baki franchise. Yujiro is the son of Yuichiro Hanma, and also the strongest character in the series. Yujiro works as a highly-paid freelance mercenary and assassin for various governments and organizations. It is unknown how much people or organizations pay him to do his mercenary job but judging from his expensive taste, it is extremely high. He is often called “the Strongest Creature on Earth”

Yes, you read that right.

So this isn’t going to be a basic workout routine. This is going to be built specifically to build crazy strength.

Here’s how they start by talking about Yujiro Hanma’s strength:

Yujiro is the strongest character in the series, with his strength being said to equal that of an entire army or more. Yujiro, along with his father, Yuichiro Hanma, was able to defeat the American military forces by himself during the time of the Vietnam War; He was 16 at the time. Some of Yujiro’s greatest feats of strength include, pushing back 100 riot police, completely stopping the tectonic activity of an earthquake by punching the ground, tapping craters in concrete walls, easily knocking out a giant elephant that not even tanks could damage, cutting glass apart with his fingers, and crushing coal into dust. It is said that Yujiro’s hits are equivalent to that of a nuclear impact, with even entire armies trying their best weapons to stop him, but to no effect. His body’s muscles are so strong and durable to the point, that he is able to do things like breaking samurai swords and knives by gripping them, walking through bulletproof-glass walls, and shaking skyscrapers by merely making his muscles tense (it is implied that it is actually his body’s aura). His finger flick can be strong enough to defeat his opponent, like he did during short battle with Chamoan. He also used this on the pre-school aged Mohammad Alai Jr, with the force of it managed to send the the kid rolling back and hit the wall several feet away.

Another indication of his strength would also be his durability, (as durability and strength are inconsistent with each other). Yujiro is durable enough to take a full impact hit from literally anything or anyone on Earth, without even flinching or being damaged whatsoever. He was shown to not be injured at all after falling from the top of a 50 story skyscraper. He has also never been shown once to actually have been hurt from any character who has hit him in the entire series until Kaio Kaku, who used the power of his own punches against him, causing him to bleed, Musashi Miyamoto with his sword can make only shallow cut on his neck or when Baki activates his demon back to make him feels pain. Yujiro´s pain tolerance is such that only very few make him actually feel it. He was shown to effortlessly overpower with just his fingers the likes of Biscuit Oliva, who is strong enough to cause interference in the GPS signal in cars all over the planet with a punch to the ground. His body is durable to the point to tank things like bullets (although he prefers to dodge them), fire, lightning strikes, blades, diseases of any kind, cannonballs, and even missiles, with none of these being able to even penetrate his skin or injure him at all. Yujiro was able to easily move at bullet-timer speeds when he was just 16.

His strength is just undeniable.

It’s actually outrageous just how powerful he is. And they go into much more.

Here’s how they continue it:

Yujiro was shown to catch a 45 lb arrow that required 200 kgs of force to successfully project and caught before it could leave the bowstrings from 9 ft away. He is shown to move at warp-like speeds, that is imperceptible to other characters vision, almost as if teleporting. He is able to easily out-maneuver any character in the series in terms of pure speed; with characters who are at mid-top tier level being able to traverse across hundreds of miles in a matter of hours on foot. He can strike with enough velocity that can break the sound barrier and rip through the air, causing extremely intense gusts of wind. When Yujiro flexes his latissimus dorsi muscles, his back takes the shape of a demon’s face, thus increasing his strength and combat abilities. Yujiro is constantly advancing his strength, becoming stronger with each person he defeats every day, essentially “devouring” them, as he himself tends to say, all the while his “demon back” is exposed.

A genius fighter who is known to have mastered all forms of unarmed combat. His repertoire apparently includes all of the well known fighting styles (such as karate, boxing, taekwondo, jujutsu, wrestling, street-fighting, and so on) as well as some more esoteric ones (such as the Udonde art, an actual system used in the Motobu-ryu of karate). Since the age of sixteen, he has been fighting on the battlefields using just his bare hands, when he fought against both American and Vietcong in the Vietnam War. Since then, it appears he has obtained respect from the American forces, even going so far as them declaring amity towards him with each new president. Yujiro also has a complete and full understanding of the human body and its anatomy and essentially has complete medical knowledge on each organ and muscle and their respective function. It should be noted as well that, Yujiro has the extraordinary ability to instantly learn and master a fighting style perfectly, upon the first time seeing it and even modify them to fit him better and directly seen other humans weakness just by looking on them.

That being said, our main focus will be strength, but I will also be giving you resources to add in mixed martial arts training as well.

Being that your body needs time to recover the focus will be put on progressive overload and consistently getting stronger and increasing the load over time (more weight each week for the exercises), it may not seem like a lot of overall training volume on a day to day basis, but I promise you that it is.

It will also give you ample time to get your MMA training in.

We’re training for strength. We need to train to become The Strongest Creature on Earth. The focus is strength gain, but it will also take prioritizing progressive overload which requires you to continuously increase the weight you’re utilizing over time. 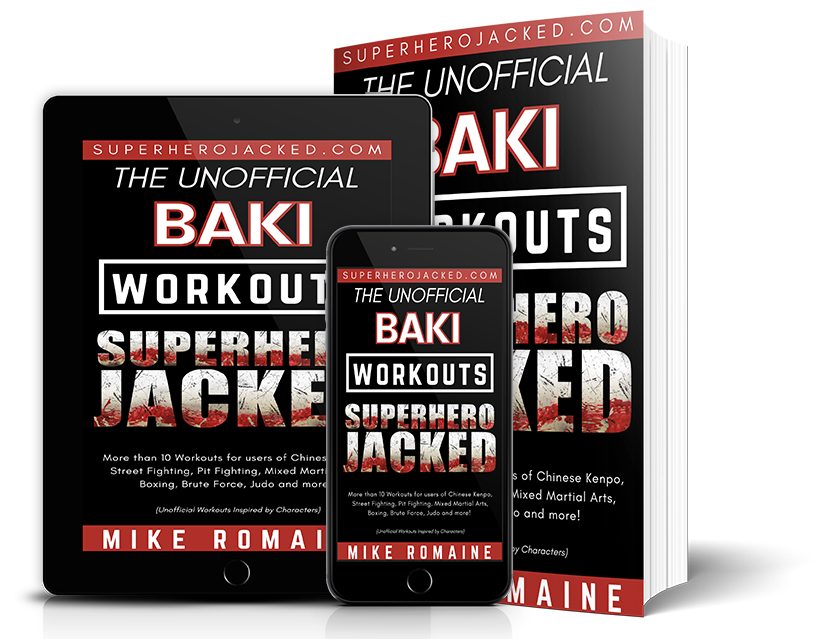