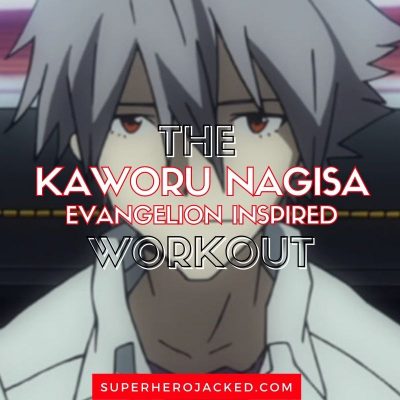 We don’t get many requests for characters from the Neon Genesis Evangelion Franchise, but Kaworu was a specific request that stood out.

While he isn’t our typical character to make it into our Anime Workouts Database, I still think he’s going to be fun to write a routine around.

While there may have been some other characters that would have potentially thought to come ahead from the franchise, The SHJ Army made it clear I should tackle Kaworu in some capacity first!

The fan forums that came up with Kaworu’s height also shared that the height of Evangelion characters has been debated…tirelessly!

That being said, his 4’11, if he is 4’11, would come in extremely short compared to all other male characters we’ve seen at SHJ.

To get us started we’re going to be pulling some background information about Kaworu Nagisa from his Wiki Fandom page and then move on to elaborate as much as needed for us to be comfortable training to really hone in on his aesthetic.

But, as we’ve seen from some of our more cosplay oriented routines we do like to bring in some extra personality and background information when working with a character that we will primarily be focusing on physical appearance for.

Here’s how his Wiki Fandom breaks down his initial bio section:

Kaworu Nagisa, also known as Tabris, is a fictional character from the Neon Genesis Evangelion franchise. He is the Fifth Child and the seventeenth Angel.

Sent to NERV by SEELE as a replacement pilot for Unit-02 after Asuka’s synchronization ratio falls below usability, he breaks into Terminal Dogma in order to return to Adam, but after he discovers the being there is actually Lilith, he allows Shinji to destroy him.

He and Rei appear in The End of Evangelion during Third Impact, communicating with Shinji in regard to the future of humanity and the choice of whether to accept or reject Instrumentality.

They go on to give a more in depth background which I actually think is quite useful, although it does retouch on some of the major points here.

Kaworuis both the 17th Angel and the Fifth Child. Although classified as an Angel, Kaworu is similar to Rei Ayanami in being a Seed of Life that inhabits a human body. Despite his human form, Kaworu does not seem to consider himself to be human, referring to humans as “the Lilin” in differentiation from himself.

Kaworu appears humming the fourth movement of Beethoven’s Ninth Symphony, the same music that plays during his descent into Terminal Dogma and so serves as a leitmotif for his character. The Ninth Symphony itself incorporates an adaptation Friedrich Schiller’s Ode to Joy (Ode an die Freude), a poem dedicated to the unity of all men under God. The moment Kaworu opens the doors to Terminal Dogma is in synch with the line “Und der Cherub steht vor Gott”- “And the Cherub (Angel) stands before God”.

Kaworu’s body appears to have been created as a result of the Contact Experiment with Adam, wherein DNA from an unknown human donor dove into and fused with Adam’s flesh, explaining Hyuga’s discovery that Kaworu was “born” on the day of Second Impact.[6] SEELE salvaged Adam’s disembodied soul into Kaworu, whom they may have recovered in embryonic form in Antarctica.

Kaworu’s origin from Adam, only intimated in the anime, is flatly stated in Sadamoto’s manga. Since Kaworu was delivered to NERV by SEELE, it is believed that Kaworu has been living under SEELE’s surveillance prior to his appearance in the series.

As I said: Kaworu isn’t the typical character we see at SHJ, but fun to build around nonetheless.

We’re going to be utilizing some calisthenics training and endurance work to put together a fairly basic routine to achieve his slender physique and toned aesthetic.

We’re going to be using a fairly basic calisthenics routine that can be scaled up (I’ll be listing the scaled variations below and you can then turn them into more difficult variations or add more reps) and also working around option endurance work which I’ll provide resources for as well.